What does the "Nakba" have in common with the many times Jews were expelled or forced out of their homes? It's obvious! 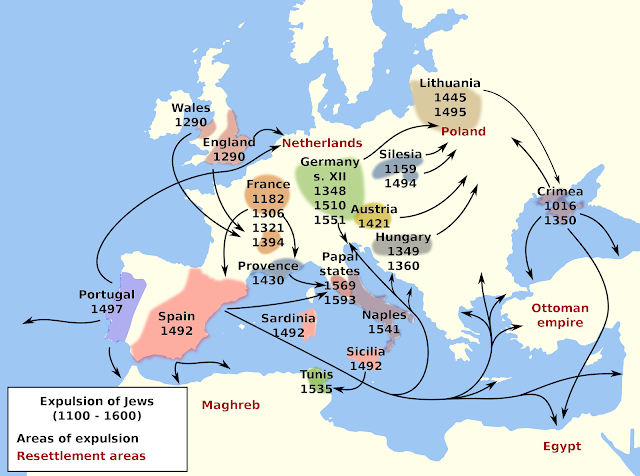 With all of the talk of "Nakba Day" this week, I wanted to see how many times Jews had become refugees in history.
A Wikipedia page lists no fewer than 70 different occasions when Jews became refugees. And it really doesn't list them all - it lumps all the Jews of Arab countries who were forced out from 1948-1972 as a single expulsion, for example.
There are many that are not well known, such as the 1679 Mawza Exile, when nearly all Jews in Yemen were banished to a desert town (for a year until their Arab neighbors who depended on them begged the king to allow them to return.)
So what do the many expulsions of Jews have in common with the so-called "Nakba?"
They are all blamed on - Jews!
A recurring motif in both Western and Arab antisemitic rhetoric is that Jews' behavior is responsible for their being kicked out of so many countries. Even Mahmoud Abbas said this in a public speech.
Jews have the unique distinction of being responsible not only for every one of the world's ills and the persecution of others, but they are also responsible for their own persecution!
Elder of Ziyon at Tuesday, May 17, 2022
‹
›
Home
View web version