Ali al-Samoudi is the Jenin journalist who was next to Shireen abu Akleh in Jenin when she was shot. He was shot himself. As such, he has been the main source of information as to the circumstances of her death - insisting that IDF soldiers shot them, that the IDF knew they were there and that there were no Palestinian gunmen in the area, and how "We were in a place far from armed clashes with Palestinians, from where we couldn't reach that area as the Israeli forces sealed it off." (So why were they hanging in a place where they couldn't report on anything?)
Nearly 20 years ago, Pierre Rehov made a documentary, "The Road to Jenin," where he documented case after case of how Palestinian journalists create the news they want.
CAMERA describes one section of the movie:

Underscoring the Palestinian penchant for inventing “news,” Rehov even manages to capture on film the manufacturing of a fictitious news story. On Jan. 25, 2003, he accompanies Palestinian journalist Ali Smoddi of the PA-controlled Jenin television station as he and his crew set out to interview a Palestinian man and his wife whose baby was just delivered by a doctor. In the car on the way there, Smoddi constructs a fictitious story in which the husband was forced to deliver the baby: “I want to emphasize certain elements. The husband has no experience in delivering and in spite of that he’s the one who delivers his wife. It’s the climax of all tragedy.” Smoddi then takes a call from the couple’s doctor, and asks: “You’re the one who delivered her? . . . No, don’t let them go.”
At the hospital, Smoddi’s crew does several “takes” of the father’s account of the birth, each with a different spin. In one version, the father claims that the ambulance they intended to meet was held up at a checkpoint for 15 minutes, and he was forced to deliver his infant son in the car, as the ambulance had not arrived. In another telling, the father says: “The soldiers took me down to the ambulance to check my identification and my wife gave birth in the ambulance and went to the hospital.” In each account, Smoddi prompts the father and makes suggestions about the events. Smoddi then prompts the new mother: “The tank stops you while giving birth. You’re alone in the car, talk about your feelings.”

Here is part of that section, captured in Richard Landes' "Pallywood I: 'According to Palestinian sources...'"
It appears that Ali Smoddi is Ali al-Samoudi: 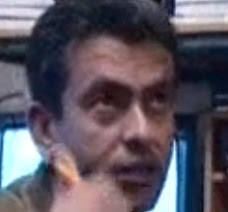 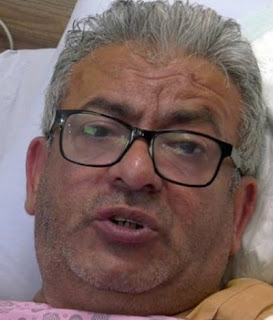 They both have a prominent widow's peak in their hairline, the same thick eyebrows, the same nose, both Palestinian journalists in Jenin with similar voices. (Arabic does not have vowels so both names are spelled identically in Arabic.)
Assuming they are the same person, the main witness being quoted in every article is known to have zero credibility and to deliberately make up whatever he wants people to hear that he thinks are best for the Palestinian cause.
This isn't proof that he is lying now. But it is a strong indication that Ali al-Samoudi is, quite literally, a professional liar, and any real journalist - no matter how sympathetic they are to the death of a colleague - should treat him as one.
(Notice also in the 2003 video clip that the doctor is an enthusiastic participant in the Pallywood creation, directing the new mother to say what Samoudi wants her to say. Pallywood isn't only from journalists: it is part of Palestinian honor/shame culture to present to the West what makes them look as righteous ss possible. It isn't a conspiracy guided by a small group of people; it is a group of actors who know what their roles are when speaking to any Westerner.)
(h/t Irene)