As the world mourns the young victims of the mass shooting in Uvalde, it is worth looking at how Palestinians and Jordanians regard another shooting at a school in Israel 48 years ago this month.
On May 15, 1974 - what is now celebrated as "Nakba Day" - three Palestinian Arab DFLP terrorists went on a shooting spree in Ma'alot, Israel, where they killed many - including shooting a 4 year old boy and his pregnant mother dead. The attack culminated in them taking 105 hostages at the Netiv Meir Elementary School, their target, where high school students from Tzfat (Safed) were staying during a field trip. They placed explosive charges between the students forced to the floor at gunpoint.
During a rescue operation, the terrorists sprayed the students with machine gun fire and tossed grenades at another group of girls. A total of 31 people were killed, including 22 students.
Palestinian websites recall this attack fondly. The Palestinian Encyclopedia calls it the Tarshiha Operation and calls the three terrorists "martyrs," proudly noting that they made it through Israeli security.
One of the terrorists, Muhammad Muslih Salim Dardour, has a street named after him in Ramtha, Jordan, his birthplace: 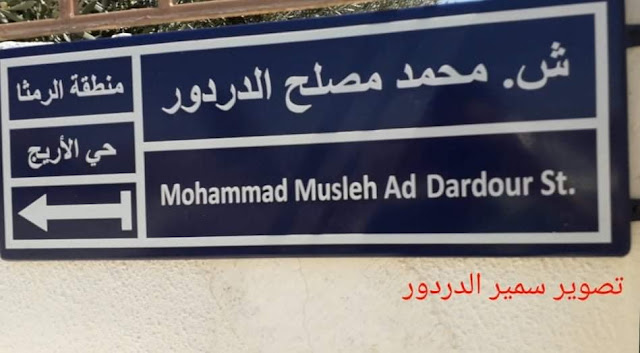 But this street wasn't named after him in 1974, or indeed at any time before Jordan's peace treaty with Israel. Dardour received this posthumous honor in August, 2020! He was praised as a heroic martyr. Even though the goal of the DFLP to force the release of over 20 hostages was unsuccessful, the attack is still regarded as a success, because so many Jews were murdered.
Yes, the kingdom of Jordan sees fit to honor the murderer of 31 Israelis - the Jordanian version of Uvalde shooter Salvador Ramos - today.
Perhaps this story flew under the radar in 2020, but Israel should strongly protest this obscene honor given to one of the most notorious terrorists in history.
Elder of Ziyon at Thursday, May 26, 2022
‹
›
Home
View web version