The corruption of the media and its bias against Israel continued, as expected, following the death of Shireen Abu Akleh.


Today, a week later, where do we stand?

Israel took a beating in the media, which gets more brazen with each opportunity to attack Israel with fabricated, twisted accounts describing outbreaks of violence.

Taking their cue from the media, politicians join in the free-for-all: 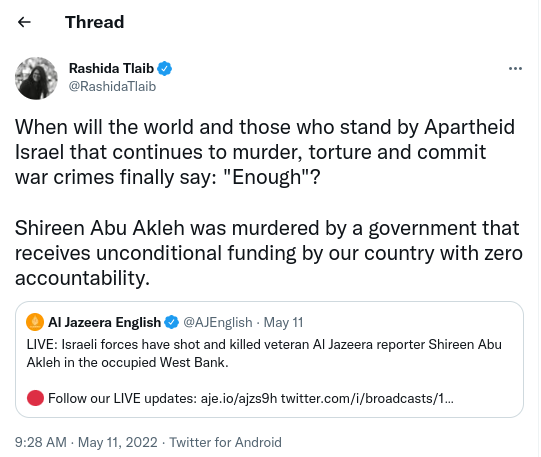 How bad is the damage?

Arial Kahana, Israel Hayom's diplomatic correspondent, contrasts Israel's official response in the death of Abu Akleh with the response to the al-Durrah incident in September 2000. Israel was slow and clumsy to respond to the death of the Arab Palestinian boy, which became a huge propaganda victory that resonates to till today.

This time was different.

At 8 a.m., just one hour after her death, the IDF Spokesperson had already issued a statement whereby, apparently, the Palestinians themselves murdered her in the midst of the gunfight. By 9 a.m. his words had been translated to Arabic and English and sent to international news outlets and foreign reporters. At the same time, a video was released intended to support the Israeli claim.

While making clear that a definitive conclusion could not be made without the fatal bullet, which the Palestinian Authority refused to share with Israel even in a combined effort, Israel stressed that the case could be made that a Palestinian shooter could have fired the shot.

As Kahana points out, that is still less than a winning argument. The Palestinian Arabs and their allies have no scruples about claiming definitively that an Israeli soldier fired the fatal shot; the best that Israel will allow itself is to say that maybe a Palestinian Arab was the shooter.

And yet, the efforts of Israeli spokespeople bore fruit: By 12 noon, most of the major news outlets in the world had already highlighted the Israeli position. It wasn't the headline, but Israel's doubts regarding the Palestinian version of events were at least given expression.

That is the best that Israel could expect from the media. But what about the international community?

Kahana contrasts two different areas where Israel is fighting to improve its image: in the media and also diplomatically in the international community.

The important countries essentially fell in line with Jerusalem. Great Britain, the European Union, and the United Nations simply asked for an investigation into the incident, and of course, expressed remorse over her death.

Even Egypt and Jordan didn't adopt the Palestinian version. Publically or behind the scenes, the Foreign Ministry didn't receive any reprimands.

The most important country of all, the United States – even more so because Abu Akleh was a dual US citizen – sufficed with a general call for an investigation, without blaming either of the sides.

Laza Berman, diplomatic reporter for the Times of Israel, noted that while the Muslim world condemned the incident, there was not a rush to specifically place the blame on Israel. In addition to the muted response from Egypt and Jordan, Israel's new friends in the Abraham Accords also did not blame Israel, while calling for an investigation.

Then there is Turkey.

Here is the response from Fahrettin Altun, who is both Erdogan’s communications director and a member of Turkey’s National Security Council: 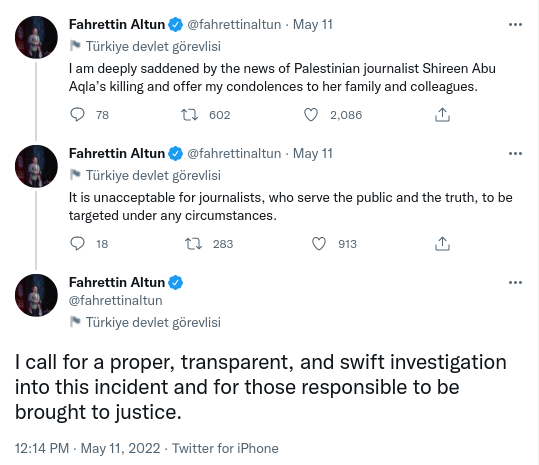 Turkey has claimed that it wants to repair ties with Israel.
It's a start.

But then things fell apart at Abu Akleh's funeral.

Following the death of Shireen Abu Akleh in a Jenin firefight between IDF troops and Palestinian gunmen, Israeli authorities managed to secure a decent public relations position – only to have the good will and legitimacy ruined by the Israel Police.

The official public relations stance of the state and military was directly contradicted by the actions of the police.

At Abu Akleh’s funeral on Friday, Israel Police reacted to rioters commandeering the coffin and hurling objects by wading into the crowd with swinging batons – even hitting those carrying the coffin, almost causing it to fall to the ground. They also tore Palestinian flags off the hearse.

Videos of the incidents went online immediately, receiving almost as much attention as the initial videos of Abu Akleh’s death. [empthasis added]

Gone is the image of responsibility.
Now, instead of just one investigation, Israel will need to conduct two.

In a war, Israel can never afford to lose.
In a propaganda war, the immediate stakes may not be as high, but losses take a toll.