Here's a tweet from Gianluca Mezzofiore, investigative journalist at CNN, on the morning of the death of Shireen Abu Akleh: 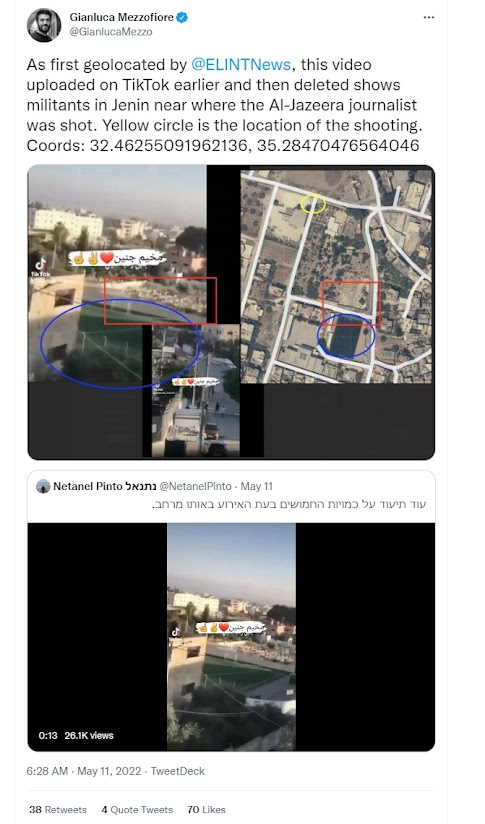 He had seen the TikTok video that showed Jenin militants near where Abu Akleh was shot to the southeast. He says it explicitly: "near where the Al-Jazeera journalist was shot."
Mezzofiore is one of the authors of the CNN hit piece saying Israel deliberately killed her.

The main evidence that Israel was responsible for her death is seen in this CNN graphic: 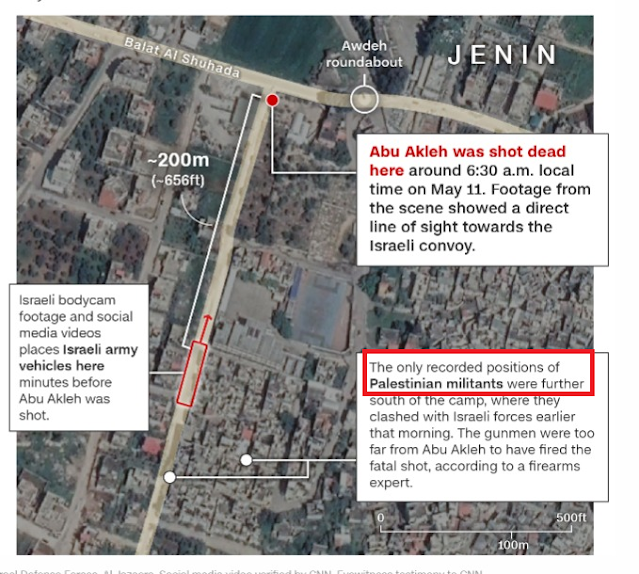 The militants to the southeast, who were exactly the correct distance to have shot her  are simply airbrushed out of history. It isn't like CNN mentioned them and dismissed them as possible shooters - they don't even mention them as existing, saying that the only recorded positions of any Palestinian militants were due south of Abu Akleh.
That is a provable lie.
The article reiterates this:

[A]n investigation by CNN offers new evidence — including two videos of the scene of the shooting — that there was no active combat, nor any Palestinian militants, near Abu Akleh in the moments leading up to her death.

We can no longer assume that CNN was not aware of the video showing other militants. It was aware and actively decided not to mention them.
And then claim that they never existed.
CNN cannot credibly claim to have discounted the video based on a calculation of the time of day it was taken. The video of the militants is difficult to check for the time, but if I'm using SunCalc correctly, it was clearly within 15 minutes of Shireen's being shot. This is a comparison of the angle of the sun's shadow in the video (a wall parallel to the street) with what SunCalc says would be the shadow at 6:25 AM: 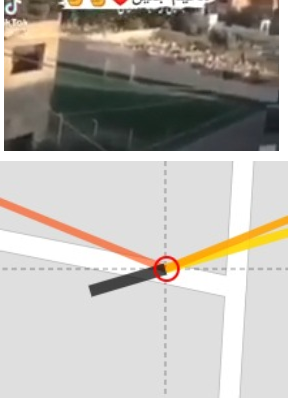 Is CNN actively withholding facts that undermine its predetermined conclusion that Israel is the only possible party that could have shot Shireen? Because this claim that there were no other militants in the area is a blatant lie on the part of the writers, not an oversight.
I tweeted Mezzifiore asking him why this was not mentioned in the article. No response as of this writing.
(h/t Jonah B)