74 years ago: World compliments Arabs on how humanely they ethically cleansed Jews from Jerusalem

This is the 74th anniversary of the surrender of the Old City of Jerusalem.
This article shows how both the Jordanians and the Swiss acted like the Arabs were supreme humanitarians - because they didn't massacre every man, woman and child and "allowed' them to leave their homes with only a few possessions.

This was ethnic cleansing.
Not a single Jew remained in the Jordanian administered part of Jerusalem for 19 years. But since Arabs are assumed to be vicious animals, when they act a little less horribly, everyone praises them.
And in another article in the Palestine Post on May 30, 1948: 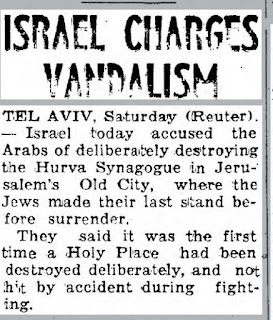 Of course, within days some 50 synagogues were deliberately destroyed by the humane Transjordanians.