The Holocaust was well documented even by 1943, but the world didn't care

In August, 1943, small items appeared in some American newspapers indicating that, by the way, 3,000,000 Jews had been murdered so far during the war.

The 300 page report by the Institute for Jewish Affairs was remarkably detailed, indicating that the news of the Holocaust was getting out - but no one besides Jews cared to listen.
Titled "Hitler's Ten Year War on the Jews," it goes through every country and every region in Nazi-occupied Europe and describes what happened to the people there.
It even includes counts of deaths and deportations by country as of 1943. 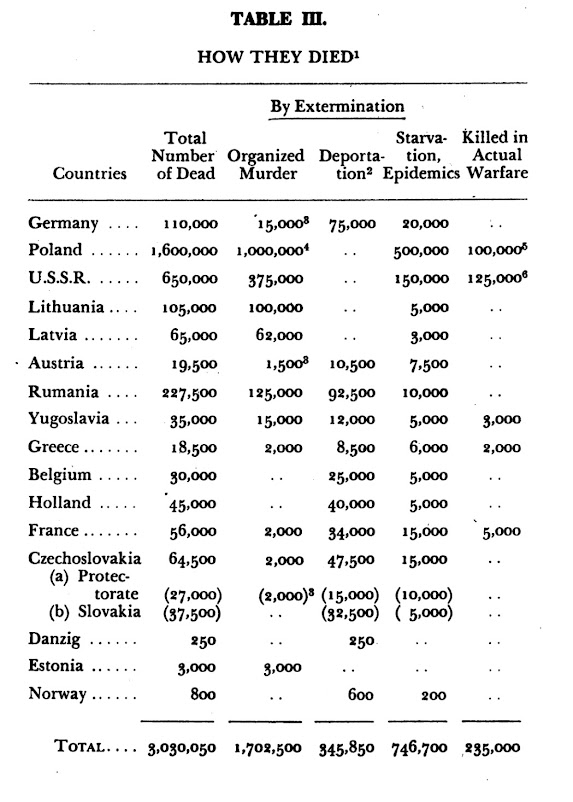 The New York Times reproduced this table in their one column article on this report - on page 7.
The report authors knew about gas chambers too, although not the details nor the extent of their use:

From an eyewitness who had been in Treblinka B, known throughout Poland as the “slaughterhouse,” has come a detailed account accompanied by a map. The camp of Treblinka B, which lies conveniently close to a railroad siding that receives transports directly from Warsaw, is the main extermination center where most of the Jews of Warsaw, and many from other ghettos have been murdered. When the victims arrived, they were told that they were in a quarantine distribution center for labor camps. On this excuse, they were ordered to undress for disinfection. They then were driven to the death house, a concrete windowless structure containing several chambers lined with steam pipes. Women and children first, the Germans ordered. The floors are wet, slippery; the victims fall, and others pile in on top of them. When the chambers have been packed to capacity, they are hermetically sealed, and the hot steam is released through the pipe-vents.

In short, no one can claim that the West was ignorant about the genocide of Europe's Jews. The media and the politicians knew very well. They chose not to do anything, or to portray the Jews pleading for help as exaggerating.
Jews cannot rely on others for their safety.