Here is a chart of how often selected countries are mentioned in the report, which is a pretty good approximation of how much effort Amnesty spends on documenting issues in each country. 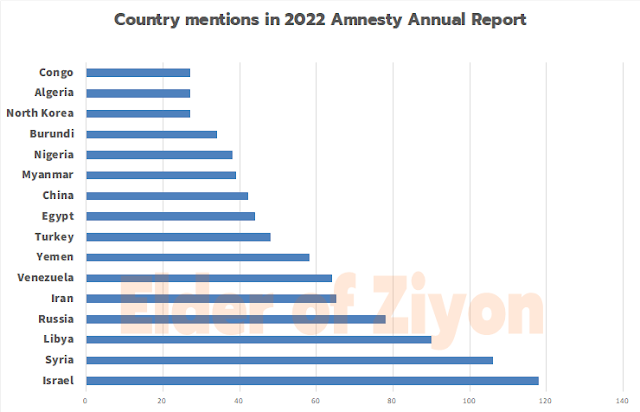 Yes, Israel is mentioned 118 times - more than Syria, more than Russia, nearly triple that of China, and more than Burundi, North Korea, Algeria and Congo combined.

For comparison, here is Statista's list of the worst human rights abusers according to objective criteria: 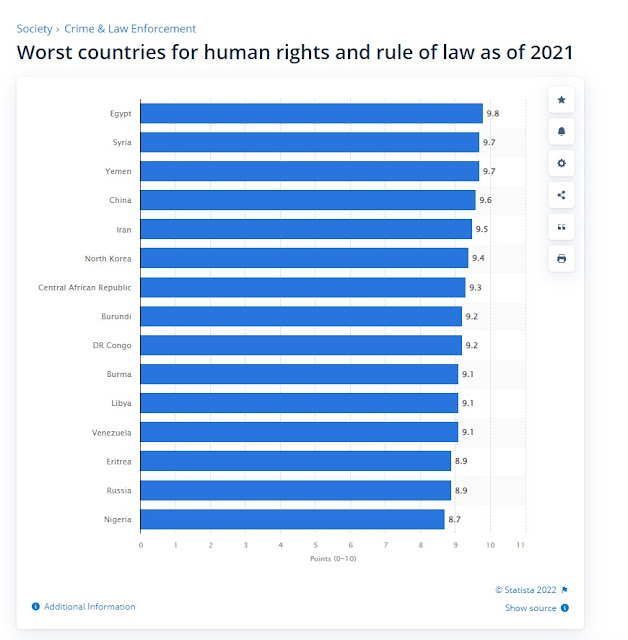 Of course, Israel isn't close to the top. Only antisemites claim it is.

The report, as usual, is filled with the usual lies and deceptions. For example, it says, "In an act of institutionalized discrimination, Israel left out around 5 million Palestinians under military occupation in the West Bank and Gaza from its vaccine campaign." Amnesty ignores that the Palestinian Authority didn't ask for, nor desire, Israel to provide them with vaccines (with one small exception that Israel agreed.)

That's merely one example of dozens of how Amnesty twists facts to make Israel appear to be, literally, the worst human rights violator in the world.

Oh, and remember how Amnesty defended itself from singling out Israel with it's "apartheid" accusation by saying it also has accused Myanmar of apartheid?  In this report, no other nation in the world is accused of apartheid besides Israel.

Amnesty is a joke. And anyone who defends its obsessive, crazed hate for Israel is guilty of Jew-hatred  as well. There is no possible justification for this amount of demonization that is so thoroughly out of proportion to Israel's actual actions.