Let's drop the pretense that Jordan is moderate and wants peace. It is a major and official driver of antisemitic incitement. 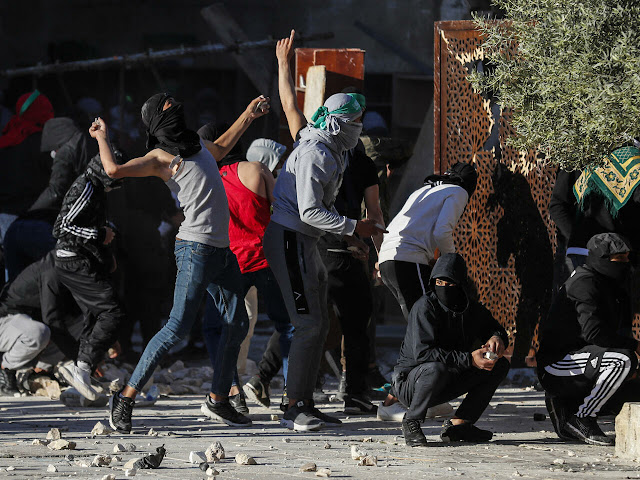 Jordan has fully backed not only the desecration of Al Aqsa by Palestinians, but also the antisemitic incitement and lies that accompany it.
From Jordan's Al Anbat News as well as Ammon News, credited to the official Jordanian Petra news agency, here are excerpts of a long article filled with antisemitic lies and incitement by interviewing "experts."

Professor of Political Science at Hebron University, Dr. Imad Al-Bishtawi, in an interview with Petra via Messenger, confirms that the Israeli attacks are getting fiercer in the month of Ramadan, against the background of Israeli allegations and myths that have no basis in order to reproduce the history of the Palestinian place according to the biblical vision that hates Arabs and Muslims.
The Israelis claim that there is a structure under the Al-Aqsa Mosque, which calls for a unified Arab and Islamic stance regarding this  ugly Talmudic nonsense, according to Al-Bishtawi.
He added, “Israel cannot make peace in its true objective sense, as it wants Arab and Islamic surrender with its narrative that says the existence of the temple, which therefore means the demolition of the Al-Aqsa Mosque and the destruction of history from its roots, especially since Al-Aqsa is the cornerstone of the concept of Palestine’s existence and the escalation of its resistance to sweeping the occupation and defeating its project.” .
For his part, the Secretary-General of the Jordanian Academic Campaign to Support the Rights of the Palestinian People, Dr. Muhammad Al-Masalha, said that what is happening in Al-Aqsa is a Zionist conspiracy linked to the Jewish thought that wants to seize the sanctities. Al-Masalha, head of the Parliamentary Studies Center (Damia), said that they call the Al-Aqsa area the Temple Mount, which is evidence that they want to own this mosque and the mountain on which it resides, which means that they link the political dimension with the religious dimension. They always talk about the Temple Mount and the Kingdom of Solomon and other superstitions, which is evidence of linking their illusions to this place, in an effort to strip the historical Arab identity of the place.
Political analyst and specialist in the Palestinian issue, Dr. Ahmed Said Nofal, said that the Israeli incursions into Al-Aqsa Mosque, especially during the month of Ramadan, carry in their meanings a disregard for the feelings of Arabs, Muslims and the Palestinian people who are suffering horrors under the Zionist occupation. Nofal, a professor of political science, pointed out that what is happening at Al-Aqsa is part of a series of official Israeli attacks on Islamic and Christian sanctities, and in order to understand the whole picture, not fragmented, the Zionist presence in Palestine is not directed against Al-Aqsa or the Church of the Resurrection only, but is against the Palestinian presence as a whole and against the Arab existence and even against the Islamic existence, by just talking about the attacks on the sanctity of prayer and worshippers, pointing out that the truth is that Palestine is occupied and Israel is an actual ugly embodiment of the most hateful forms of occupation that will only be removed by continuous confrontation.
The Secretary-General of the Royal Committee for Jerusalem Affairs, Abdullah Kanaan, indicates that the Israeli occupation continues its colonial approach in the city of Jerusalem with the aim of Judaizing it and expelling its Arab people, and based on the false mythological Talmudic narrative, which falsely says that the blessed Al-Aqsa Mosque/Al-Haram Al-Sharif is the alleged Temple Mount.
Extremist groups (Temple organizations), and with the protection of the Israeli occupation forces, repeatedly stormed the blessed Al-Aqsa Mosque and constantly endeavored to establish Talmudic rituals in the courtyards of the blessed Al-Aqsa Mosque, in addition to the rituals they conduct at Al-Buraq Wall (the western wall) of the blessed Al-Aqsa Mosque.
He said that their false pretext for storming Al-Aqsa Mosque is the celebration of the Jewish religious holidays, which have become a dangerous date to justify the attack on Al-Aqsa Mosque and the Islamic and Christian sanctities in Jerusalem, especially what accompanies these Jewish holidays in terms of restrictions on Jerusalemites and the brutal attack on worshipers and those who stationed in Al-Aqsa.
The Royal Committee for Jerusalem Affairs confirms that the true, non-false history, facts and archaeological evidence, including research conducted by Western and Jewish scholars In addition to the international legal resolutions, explicitly demonstrate the Arabism of the city of Jerusalem, the Islamicness of the blessed Al-Aqsa Mosque, and the absence of any relationship for the Jews with it.

Keep in mind that Jordan's own Waqf guards were the only people supposed to be maintaining order on Al Aqsa before during the riots - and they didn't do a thing to stop Palestinians from preparing and stockpiling rocks and fireworks. In al probability, they facilitated the violent rioting.
When Jordanian officials appeal for "calm," they mean they want to physically bar Jews and Israelis from  Judaism's holiest site.
Elder of Ziyon at Wednesday, April 20, 2022
‹
›
Home
View web version