In 1938, "Nature" published a paper saying Jews can't easily be good physicists - but Aryans are the best 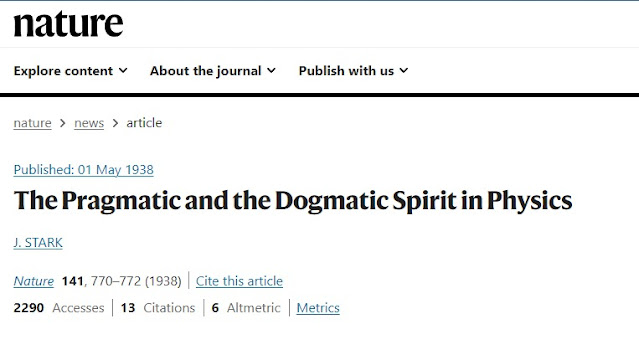 In 1938, Nobel Prize-winning physicist Johannes Stark published a paper in Nature, called "The Pragmatic and the Dogmatic Spirit in Physics."
In that paper he argues that there are two types of mindset among physicists:

I have come to recognize that there are two main types of mental attitude among workers in the field of physics.
The pragmatic spirit, from which have sprung the creations of successful discoverers both past and present, is directed towards reality ; its aim is to ascertain the laws governing already known phenomena and to discover new phenomena and bodies as yet unknown.
The physicist of the dogmatic school operates in quite a different manner in the field of physics. He starts out from ideas that have arisen primarily in his own brain, or from arbitrary definitions of relationships between symbols to which a general and so also a physical significance can be ascribed.

As one reads the paper, one sees that Stark has a marked preference for the "pragmatic" school and hi8s special loathing for Einstein.

Finally, towards the end, he comes to his point:

I have taken the field against the dogmatic spirit in Germany because I have been able to observe repeatedly its crippling and damaging effect on the development of physical research in this country. In this conflict I have also directed my efforts against the damaging influence of Jews in German science, because I regard them as the chief exponents and propagandists of the dogmatic spirit.

This reference brings me to the national aspects of the mental outlook of men of science in research. It can be adduced from the history of physics that the founders of research in physics, and the great discoverers from Galileo and Newton to the physical pioneers of our own time, were almost exclusively Aryans, predominantly of the Nordic race. From this we may conclude that the predisposition towards pragmatic thinking occurs most frequently in men of the Nordic race. If we examine the originators, representatives and propagandists of modern dogmatic theories, we find amongst them a preponderance of men of Jewish descent. If we remember, in addition, that Jews played a decisive part in the foundation of theological dogmatism, and that the authors and propagandists of Marxian and communistic dogmas are for the most part Jews, we must establish and recognize the fact that the natural inclination to dogmatic thought appears with especial frequency in people of Jewish origin.

This was published in one of the most prestigious science journals, which remains respected today!
For its part, Nature published a tepid statement slightly distancing itself from the article:

"At the moment we make no comments upon the views expressed by Professor Stark; and we gladly give him the opportunity of making them known to the scientific world. We should, however, be surprised if the limitations which these new principles impose . . . are generally accepted as the highest or the best means of promoting the advancement of natural knowledge."

But in the end they "gladly" published the ravings of an antisemitic, pro-Nazi fanatic.
Anyone who thinks that science is objective and impervious to hate needs to read about this episode.
Elder of Ziyon at Thursday, April 28, 2022
‹
›
Home
View web version