According to Palestinian media, some 250 "civil service and human rights organizations' signed a statement condemning Israel's "attacks on worshipers at Al Aqsa Mosque" on Friday.
I could not find the list of these organizations anywhere.
But some anti-Israel human rights organizations have some credibility in the Western world, and try not to lie explicitly - just twist facts. How did they cover the Friday riots, that were clearly initiated by Palestinian Arabs who had been incited for a week to violence in pretense of "defending Al Aqsa" from a nonexistent threat?
For the most part, they were silent. Because they know that the facts are that the only desecration of Muslim holy sites was done by Muslims, not Israel.
Human Rights Watch said nothing, and neither did its head Ken Roth.
Amnesty International said nothing.
B'Tselem said nothing.
The Al Mezan Center for Human Rights only retweeted the Palestinian Red Crescent Society description of the injuries without describing the actual events.
If Israel attacked the Al Aqsa Mosque unprovoked, each of these organizations who obsessively cover everything Israel does would have been in the forefront of condemning Israel. Since they didn't want to be shown to be liars, for the most part they stayed silent and let the Arab and anti-Israel media spout their lies unopposed.
There was one exception: the Palestinian Center for Human Rights wrote up the incident on Friday. And if you read their condemnation of Israel carefully, you see that they admit that the Israeli police were forced to respond to being attacked first:

As per PCHR investigations, as al-Aqsa Mosque’s gates were opened and thousands of worshipers arrived for al-Fajir (dawn) prayers on Friday, 15 April 2022, the atmosphere was extremely tense due to the heavy IOF presence in the area, and on the rooftops near al-Silsila and al-Magharba gates. Thousands of worshippers gathered and prayed; after al-Fajir prayer, young men prepared wooden roadblocks around the al-Qibli prayer hall in anticipation of a possible IOF raid. They fired firecrackers towards al-Magharba gate where IOF stationed. Immediately, IOF raided the entire Mosque with hundreds of troops; the soldiers started shooting live bullets, tear gas canisters and stun grenades aggressively and randomly. As a result, dozens of worshipers and gathered civilians were wounded.

In the following paragraphs we learn that "live bullets" means rubber bullets. And the police didn't enter Al Aqsa "immediately," they waited hours until prayers were over and Palestinians barricaded themselves inside and threw stones - but to Palestinians, the entire Temple Mount is called "the Al Aqsa mosque" so PCHR is not technically lying if you know that little fact.
Several paragraphs later, they admit:

It should be noted that on Thursday afternoon, 14 April 2022, around 2000 worshippers performed I’tikaf in the Qibli Chapel in al-Aqsa Mosque despite IOF’s harassment and heavy deployment in the mosque yards, at its gates and around it to.  This was upon national calls to mobilize on Friday dawn, 15 April 2022, against settlers’ attempts to hold sacrifices after calls from settlement organizations for the Jewish Passover holiday, which start today and continue for a week, provoking extensive outrage among Palestinians.  Therefore, the Israeli authorities announced to stop any sacrifice attempts. 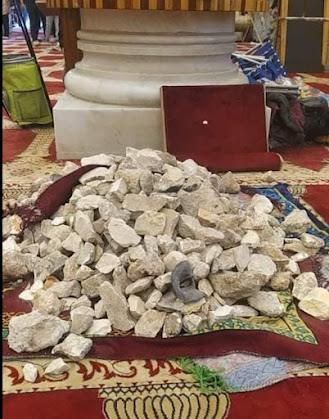 Reading between the lines, PCHR reluctantly admits the truth: there was no danger of Jewish "sacrifices" being held on Friday. The Palestinian "worshippers" were told to "mobilize" Thursday night and early Friday morning. The violence was started by Palestinians.
Of course, PCHR doesn't mention that fireworks and stones were stockpiled ahead of time and the violence was planned by the "worshippers."
PCHR tried to twist the facts into something where they could condemn Israel. The other ones decided to stay silent because ultimately they would be forced to admit that the only desecration of the Al Aqsa mosque came from Palestinians who turned it into a headquarters for attacking Israeli police.
You can learn a great deal from what rabid Israel haters who want to be accepted as credible in the West say - and what they don't report.