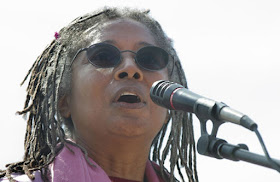 Yair Rosenberg writes in his Atlantic "Deep Shtetel" column that a Tablet magazine piece he wrote in 2018 about how writer Alice Walker spouts crazed antisemitic conspiracy theories went viral and ended up, to some extent, "canceling" her.

Now she is about to release her last 50 years of journals, and Rosenberg is ambivalent about his role on sort-of but not really "canceling" Walker:

In essence, the public has responded to her prejudice by either completely sidelining her over her bigotry or completely ignoring that bigotry. I don’t think either of these approaches is constructive, and not just in this case.

It would start by recognizing two principles. First: Human beings are complex and broken, and can rarely be reduced to their best or worst attributes. This means that great wisdom can coexist with great ignorance, and we should try to access the former while discarding the latter. Second: Accountability requires actually confronting the offense, rather than avoiding it.

In practice, this means that organizations and outlets should not deplatform Walker. Instead, they should refuse to give her an uncritical platform. Every time she appears at a public event or is interviewed by a publication, she should be asked at the outset to account for her anti-Semitic utterances. These questions should be posed in specific and concrete terms, making explicit reference to the ugly ideas she has written and recommended. If she is unwilling to submit to this line of questioning, she can withdraw from the engagement herself. If she is willing, audiences will be made aware of her profound flaws and be able to take them into account when consuming her other output. They will be better equipped to tap into the good in Walker’s work while rejecting the bad.

... If a person is never pushed to answer for their prejudice, they are unlikely to reconsider it. This is not just true for Walker, but for many analogous cases. Forgiveness requires accountability and genuine contrition. But while our society today is very adept at imposing punishment, it is very poor at providing a path to rehabilitation.

I am not a fan of cancellation, but this strikes me as naive, something one rarely sees from Rosenberg.

Let's see what his plan would look like in the real world, knowing what Walker has written about Jews over the years:

"Welcome, Ms. Walker. It is a real honor to have you on my show."

"Now, you have written some controversial views about Jews and Israel that has been criticized by the Jewish community. You have been accused of antisemitism."

"No, Clive, I am not against Jews at all. I am being criticized because I am pro-Palestinian. Lots of people who criticize Israel are accused of antisemitism. It isn't true! I am only against Zionist Nazis, not Jews."

"But you have written things like the Jewish Talmud says that gentiles should be killed and young boys may be raped. Don't you see how that is offensive?"

"No, Clive, I am simply asking questions about the Talmud. I have seen evidence that the Talmud says all those things and worse. Rabbi Brant Rosen has verified my quotes. No one has refuted them. Why can't I ask questions? Do you know the Talmud better than Rabbi Rosen?"

And poor Clive will be left stuttering, and the audience adoring Walker for her bravery.

In short, allowing Walker to have a platform allows her to spew her lies, and unless a rabbi is invited to each of her talks, any challenge to her views will be turned around with the audience not knowing whom to believe.

To think that Walker can become contrite over her views, when she has been unrepentant about them even as they have been refuted, is dizzyingly optimistic. The person who proudly says that her knowledge of the Talmud somes from watching YouTube videos of antisemites is not about to start caring about facts.

Walker is an antisemite. There is no reason to sugar-coat it or excuse it because of her writings or skin color or political views. She should be treated exactly as a unrepentant racist would be treated on a book tour - and nowadays, that means that her hosts would want to be very careful not to be associated with someone whose views are so repugnant.

If that is cancellation, so be it.

Walker has had years to revisit her views. Her slanderous, patently false poem on the Talmud remains on her website, today. Even beyond the fake Talmud quotes, her poem considers all Jews the enemies of "us":

Are Goyim (us) meant to be slaves of Jews, and not onlyThat, but to enjoy it?Are three year old (and a day) girls eligible for marriage and intercourse?Are young boys fair game for rape?Must even the best of the Goyim (us, again) be killed?Pause a moment and think what this could meanOr already has meantIn our own lifetime.

You may find that as the cattleWe have begun to feel we areWe have an ancient history of oppressionOf which most of us have not been even vaguelyAware. You will find that we, Goyim, sub-humans, animals-The Palestinians of GazaThe most obvious representatives of usAt the present time – are a cruel example of what may be doneWith impunity, and without conscience,By a Chosen people,To the vast majority of the peopleOn the planetWho were not Chosen.

The only person she listened to was an anti-Zionist Israeli whose knowledge of the Talmud is nearly as poor as Walker's. And Walker's response was...more antisemitism.

This has nothing to do with Israel. This is a seething hatred of Jews. Perhaps it is because of Walker's hate of her first husband, who was Jewish. Who knows? It isn't important.

What is important is that this noxious, hateful person is about to be celebrated for her "journals."  Her publisher will call her a genius who must be read. She will do the talk show circuit. And even well-meaning interviewers will not know enough to confront her intelligently without ending up legitimizing her and her hate.

The proper response to antisemitism and racism is not always so clear. Some people who spout offensive opinions can be educated. Alice Walker is not one of them.