Here are some newspaper clippings on how the Arab world supported Nazis after their defeat.
The Daily Times-News, Burlington NC, Thursday, August 28, 1958: 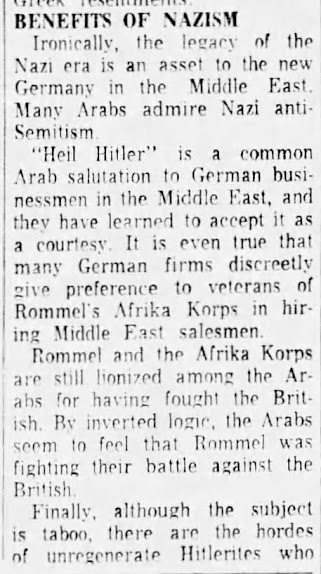 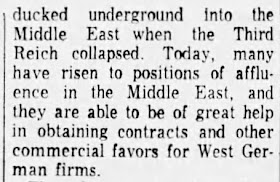 Dear Eichmann,
1 address you in your glass cell to extend a word of sympathy in your present plight. German genius that has invented sputniks and missiles and all sorts of things has failed to inspire you to avert the disaster that has befallen you.
What a pity Eichmann that you allowed those swine to arrest you and stage their drama. But don't worry Eichmann it will in the end fall on their heads.
Listen Eichmann you are accused of dissimating (sic) six million of this breed. Whether this is correct or not it is not our object to debate this issue but what we like to say is this if you actually managed to liquidate six million of them and if the remaining six million have been instrumental in inflicting so much havoc and suffering on the Arabs and disgorging them from their homes we wonder what would have been the result if the dissimated (sic) six million would have been allowed to survive. It is likely that a similar drama would have been staged in another part of the Arab countries. So that by liquidating six millions you have minimized the extent of the calamity and conferred a real blessing on humanity. You can imagine dear Eichmann the feelings of the million or so of Arab refugees at this drama. . .

The object of this trial is simply to attract more tourists to the occupied section and to exploit it for fund raising and for skinning the rest of mankind.
But be brave Eichmann find solace in the fact that this trial will one day culminate in the liquidation of the remaining six million to avenge your blood and the manner in which you have been kidnapped and brought to trial by the very same people who tortured and ejected a million or so from their homes.

Similarly, from the same source: