The Ukrainians are Coming--or Not (Judean Rose, UPDATED)

Ukrainians are either staying and fighting, or fleeing. And one of the places they want to go, if they are fleeing and of Jewish descent, is Israel. Israel is preparing to absorb thousands of Ukrainians eligiblefor aliyah. The Jewish Agency opened six immigration processing stations at six Ukrainian border crossings to assist the refugees in making aliyah. “We [preparing] to provide humanitarian assistance on the ground, and of course to facilitate the immigration of Jews, from all relevant places,” said Prime Minister Naftali Bennett, on Tuesday.

It is at times like these, that Jewish “blood” is a ticket out.

Funny how our ancestors remembered things COMPLETELY different. From a resource at The National Library of Israel:

During the Holocaust, it is believed that a million Jews were killed in Ukraine, including those killed in a large massacre at Babi Yar and others murdered by the Einsatzgruppen. The Germans were joined by Ukrainian collaborators, and according to the Simon Wiesenthal Center, “Ukraine has, to the best of our knowledge, never conducted a single investigation of a local Nazi war criminal, let alone prosecuted a Holocaust perpetrator.” After the war, Jews who returned to their former homes in Ukraine were met with hostility by the local population.

It is understandable that Korniychuk wants Israel to take in Ukrainian refugees, what he calls a “humanitarian issue.” But he has spit on the graves of our people with his lies. The Ukrainians were not good to the Jews during the Holocaust or at any time before in history, they were culpable for Babi Yar, and much more. There is a reason Putin uses Holocaust imagery to describe Ukraine. There is a reason Putin's forces attacked Babi Yar.

Korniychuk can cherry-pick righteous Ukrainian gentiles until the cows come home. This will not, however, change the bloodcurdling facts and history of the Jewish sojourn in Ukraine. 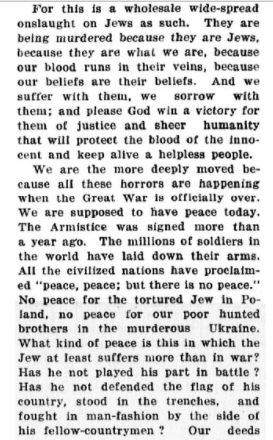 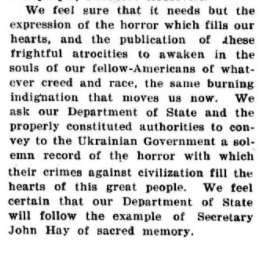 The magnitude of Korniychuk’s suggestion—that Ukraine was good to the Jews—casts doubt on anything else he might say. Up to and including the accusations of Israeli graft and deportation. At a minimum, the ambassador’s report is missing context. Such as the eligibility of individual refugees  to make aliyah. Eligibility makes all the difference, and this is as it should be in the Jewish State:

The Forys are in a different situation than most of their neighbors in Kyiv: The Jewish people and the Israeli government have their back. The family is staying in a beautiful prepaid hotel room. They are given three meals a day, and will be immigrating to Israel on Wednesday.

When they arrive in Israel, they’ll be able to stay in a hotel for at least a month, all paid for by the Israeli government. A Jewish Agency emissary is now helping them with anything they need.

Korniychuk is disingenuous when he suggests that the purported deportations are by way of Israel siding with Russia, and not having Ukraine's back.

"I am trying to be diplomatic," said Korniychuk. "My family is partially in Ukraine. We definitely need more help and we have received more help from other partners in the world than [from] Israel but we hope that decisions will be taken and there will be more aid from Israel in the coming days."

If Korniychuk were really trying to be diplomatic, he would be honest about the diplomatic delicacies of Israel siding not with Russia, but against Russia, vis-à-vis Syria, while still showing support for Ukraine. If he were being honest, he would speak to the eligibility to make aliyah of the individuals fleeing Ukraine. But we already know that Korniychuk is not being honest or diplomatic. We know this because of his gross lies about the Ukrainian role in the Holocaust.

In all of this, there is something to be gleaned. Israel is the place Jews go when they have no place to go. But it’s also the place where people who have the merest tangential connection to a Jew will try to go when things are bad at home. We understand this.

We also understand that it is maintaining Jewish stewardship of the land that serves to protect our people and the land itself, with both of them endangered species.

Everyone is rooting for Ukraine right now, the mighty underdog. Israel is no different. We refresh and refresh our news pages for updates as do you. We’re saying prayers for Ukraine and for all its people. And Zelensky, of course has captured our hearts.

But Israel is not like other countries. Israel is not a random place of refuge. It's the Jewish State, a place where Hebrew is the dominant language, and Judaism the predominant religion. All we ask is that this be respected. We are happy and have made preparations to absorb all those eligible for aliyah.

The State of Israel was founded on the idea that it would be, first and foremost, a Jewish State. Occupied, persecuted, and pursued until today, the Jews know that they will always have a home in Israel--a Jewish home, where you don't have to hide your Jewish star, or change your name.

This is why Israel exists, on land that was always ours.

UPDATE: Reader Esty points out that the supposed Russian attack on Babi Yar may have been Ukrainian propaganda, since the missile in fact, hit a communications some 300 meters away. Israeli correspondent Ron Ben-Yishai says the Babi Yar memorial and cemetery were unharmed in the attack. And still, Babi Yar stands as testimony that Ukrainians, far from saving Jews during the Holocaust, were active participants in the Babi Yar Massacre.