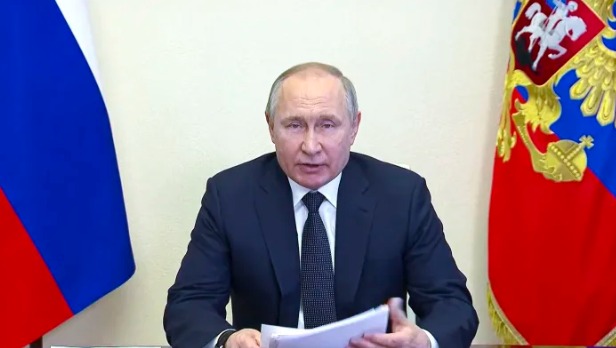 In his Wednesday speech, Russian president Vladimir Putin compared Western sanctions imposed on Russia, its economy, athletes and cultural world to the persecution of the Jews by the Nazis in the 1930s.
He said in the speech::

In many Western countries, people are subjected to persecution just because they are originally from Russia. They are being denied medical care, their children are expelled from schools, parents are losing their jobs, and Russian music, culture, and literature are being banned. In its attempts to “cancel” Russia, the West tore off its mask of decency and began to act crudely showing its true colours. One cannot help but remember the anti-Semitic Nazi pogroms in Germany in the 1930s, and then pogroms perpetrated by their henchmen in many European countries that joined the Nazi aggression against our country during the Great Patriotic War.

Whatever one thinks about Western blanket sanctions against all things Russian, it is nothing like how Nazis treated Jews in the 1930s. For one thing, Jews in Germany were utterly helpless, as they didn't have a state that could protect them.
Putin's use of the word "pogrom" is also telling, since the Russian word has been used since the 19th century to initially refer to Russian attacks on Jews.  There seems to be a desire by Putin to pretend that there is no Russian history of antisemitism and it is a purely Nazi invention.
Both sides in the Russian invasion of Ukraine are not shy about accusing their opponents of antisemitism. This is not out of any love for Jews on either side. In some ways, the analogies to Jews that we are seeing are themselves a form of antisemitism.
For one thing, it is a minimization of actual pogroms and historic attacks on Jews. The war is not an attack on race or ethnicities; it is driven by nationalism. Russia may be targeting (or at least grossly uncaring about the lives of) civilians, but they aren't targeting victims by race.
Secondly, the comparisons with Jews on both sides has an implication: Jews are a dominant, unified, worldwide force and therefore both sides want to use them for their own political gains. It is a diluted version of the Protocols of the Elders of Zion where the powerful Jews decide which side should win to help their own (nefarious) goals.
When the Jews don't do what these leaders demand, that itself can foment antisemitism in their own countries.
When world leaders invoke Jews to make a political point, it is rarely good for the Jews.