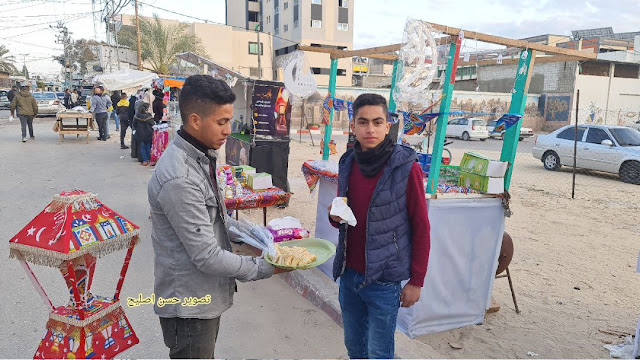 Four people were killed in a suspected terrorist stabbing attack at a shopping center and gas station in Beersheba, with a number of others injured in the attack, according to emergency services.
According to police, the terrorist arrived at a gas station and stabbed a woman before getting in a car and running over a man riding on a bicycle. He then exited the car and stabbed a man and a woman before being shot and killed by a civilian passerby.

Here we see Gazans handing out candy in celebration of the murder of Jews.
Hamas and Islamic Jihad praised the attack.

The terrorist, Muhammad Alab Ahmed abu Alkiyan, is a Bedouin Israeli from the town of Hura who has served time in Israeli prison in the past.
Alkiyan was arrested in 2015, along with a number of other suspects, for supporting and promoting ISIS to students at a school he taught at.

Palestinian terror groups pretend that they hate ISIS. They pretend (to the West) that they don't support attacking civilians.
But whenever there is an attack on innocent Jews, they celebrate, and they are quite allied with ISIS.
Not only do the terror groups celebrate - regular Palestinians do as well. Palestinian opinion polls consistently have shown overwhelming support for specific terror attacks that killed large numbers of Jews.