Of Ukraine Hero Worship and the Jews (Judean Rose) 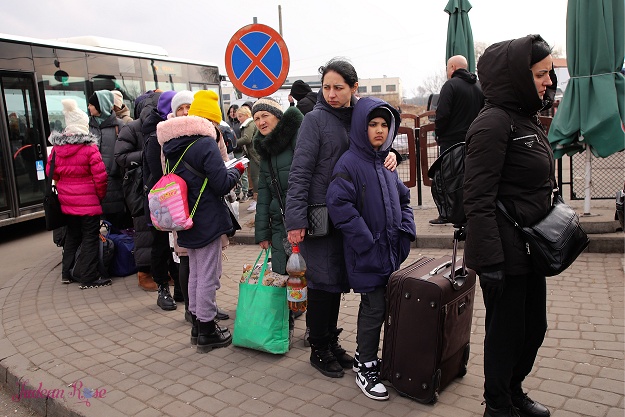 Ukraine and the bravery of the Ukrainian people are on our minds, and the topic of seemingly every news story. Everyone knows that Putin is evil, full stop. We are all aware that this ex-KGB man is committing war crimes, for instance hitting evacuation crossing points, murdering innocent civilians even as they attempt to flee. Ordinary Ukrainian citizens refuse to fold, resisting and hitting back however they can. Still, as the inexorable invasion of Ukraine winds on, this pervasive hero worship of the underdog Ukraine has left some Jews discomfited.

Some of the Jews made uncomfortable by the elevation of Ukrainians to hero status, grew up Jewish in Ukraine, or had relatives who did. Others tell bloodcurdling family stories of relatives murdered during bloodthirsty Ukrainian pogroms and massacres. We applaud the courage of the modern Ukrainian, but we remember the history, both old and new, of Jews in Ukraine.

There is Babi Yar, for example, that happened only 81 years ago. Some of us may have parents or grandparents who were alive when the massacre occurred. Others may be named for the kedoshim—the holy ones—who were murdered there.

But there is newer history even than Babi Yar. Katarina Matlin, a woman in her thirties, left Ukraine for the United States not so very long ago. Matlin can attest to the fact that Ukrainian antisemitism is still alive and kicking, both from personal experience and from monitoring what Ukrainians are saying on social media today. Responding to a question I asked on Facebook, “Is it in bad taste to talk about Jewish history as it relates to Ukraine while innocent Ukrainians are being slaughtered?” Katarina wrote:

I grew up in Ukraine. About electing a Jewish president… Jews have served in the highest echelons of governments in the most antisemitic countries throughout history. This is nothing new. Zelenskyy’s election doesn’t mean Ukraine got over its antisemitism. It’s no different than why they’d go to a Jewish doctor. Besides, Zelenskyy pointed out during his campaign that he married an ethnic Ukrainian and had his kids baptized in the Ukrainian Orthodox faith.

About current antisemitism… It’s as bad as it’s ever been. I don’t know why anyone would say that Ukraine suddenly shed its antisemitism. I’m a part of this generation and I could write a book about being on the receiving end of Ukrainian antisemitism. I’ve been reading local Ukrainian Facebook groups and they’re spewing venom at Jews just like they always have. They’re already blaming us for this war, just like they blamed us for bringing Hitler, the famine, disease, and every other misfortune.

Not every Jew who feels uneasy with Ukrainian hero worship lived there in recent times, like Katarina, or had a relative directly impacted by antisemitism in Ukraine. Some of us just feel a deep connection to Jewish history and to the Jewish people as a whole. Whether we are from Ukraine, Lithuania, or Morocco, we are one people from Israel, who have wandered in exile for thousands of years. When there is antisemitism, it doesn't matter where it happened or to whom. For us, it’s personal.

The awakening of national memory comes to us in different ways. For some of us, it is our reading that does it. What we learned has made us leery of applauding Ukrainian courage. We have read everything we can get our hands on about the history of the Jews of Ukraine. The stories and events stay with us.

Reading is not the only way to look on from afar and have history touch you. Many of us have listened to Survivor testimonies and may have spent time with Survivors. Herb Glatter (“80 last August 22nd and proud of it”), for example, will never forget his brother in-law Al’s story of survival:

My sister’s husband was a survivor of Auschwitz, Mauthausen, and Gusen. He rarely spoke about those times, perhaps with fellow Survivors, I don't know. I do recall him saying: "There were more Ukrainian than German guards in Auschwitz."

I have never viewed the testimony of him and his brother at the US Holocaust Museum (USHMM), but I have it. His granddaughter named her son Al in his honor, I still choke up when I hear that.


Herb’s story of Al the Survivor is an example of how the Holocaust touches all of the Jewish people. What happens to one of us, happens to all of us. And we have a long national memory.

That is precisely the problem. Some of us take umbrage with putting these memories aside, even temporarily, while innocent Ukrainians are under siege. Those inclined to forgive and forget, however, want us to put history on the backburner, and instead show support and sympathy.

We do sympathize. But we feel guilty, too. When we sympathize with the Ukrainian people, we feel as though we are betraying those who suffered or perished at the hands of Ukrainians. We feel like we are betraying ourselves as a people, looking away from an issue of tremendous national significance. Is it right to elevate the courageous Ukrainians above our own exquisitely appalling history and experience in Ukraine?

We can’t help our thoughts, even as we work to tamp them down. It is embarrassing to say these things aloud in this news cycle and climate, but some of us think them anyway. Should we dare to allude to such thoughts in public, we are sure to be deemed inappropriate and chastised by the others.

I find it tasteless, and I'm holding my tongue, to bring it up while the entire people of Ukraine are being bombarded.

I understand. That is why I held back until now. And I ache for what these people are going through and am furious with Putin. But the thought still does occur. Guess you're a better person than I.

Across the very wide spectrum of Jewish thought and opinion, we have those who for now, only see the horror of the present-day slaughter. Their hearts go out to the Ukrainian people without reserve. They are at peace with their natural inclination to sympathize with a victim, irrespective of history or even recent deeds. One Israel-based friend said, “I think now is not the moment. There are many Jews there, or were, as many are coming here now. IM"H (God willing) they will all come here.”

Two friends referenced Hagar and Ishmael in the desert as in Genesis 21:17:

As my friend Sharon Katz explained:

Hashem heard the voice of the boy as he was (at that moment). We all know the violence and death brought on by Ishmael, but Hashem judged him at that moment.

** Fast forward thousands of years, Ukraine is a place drenched in Jewish blood, between Chelminicki, Babi Yar, and thousands of pogroms throughout the centuries. It was a BAD place for Jews.

** ** Fast forward further to 2022, Ukraine has a thriving Jewish community and Jews have made a comfortable place for themselves there. I don't know what will happen in the future, if this determined country can survive, with G-d's help, and if it does, if it will continue to be kind to the Jews. But I know that Hashem judges people in THE MOMENT, and at this moment, He is deciding whether they are worthy of His mercy and help.

This is a beautiful thought, well-expressed and persuasive. And still, some of us see “THE MOMENT” differently. Our eyes are drawn to certain parts of certain news pieces. How Zelenskyy does not feel that Bennett has wrapped himself in the Ukrainian flag.

Why this criticism of the Israeli prime minister? We are all in awe of Zelenskyy's stand against the Russian giant, but as one friend put it, “A Jew leading a non-Jewish country is always a Jew who is out-goying the goy.”

It’s not just Zelenskyy who criticized Israel, of course. There is the Ukrainian ambassador to Israel who suggested that not enough Jewish dollars have been sent to Ukraine. "I am trying to be diplomatic," said Yevgen Korniychuk. “. . . we have received more help from other partners in the world than [from] Israel but we hope that decisions will be taken and there will be more aid from Israel in the coming days."

When more aid did arrive from Israel, Korniychuk continued in his tirade against the Jewish State.

“I don’t understand the limitations that Israel imposes.” Korniychuk said conversations were ongoing over a possible acquisition of protective gear from Israel, and donned a helmet as an example.

“Explain to me how it’s possible to kill with this,” Korniychuk said of the helmet.

We don’t need to explain anything to Korniychuk. Israel has taken in more refugees than any country in the West that does not share a border with Ukraine. Our Torah observant prime minister, viewing the situation as a matter of life and death, traveled on the holy Sabbath to mediate between Russia and Ukraine. Israel has sent 100 tons of aid to Ukraine, and is also there on the ground, setting up field hospitals, and helping however it can.

Aside from the criticisms of the quantity and quality of Israel’s support for Ukraine, Ukraine’s foreign minister Dmytro Kuleba accused the Jews of taking blood money, that old and ever-popular antisemitic trope. Kuleba went to the press to take El Al to task for accepting payments via the Russian banking system 'Mir' in an effort to evade sanctions. Except that never happened.

In a now deleted tweet, Kuleba showed a screenshot of the El Al website as “proof” of his false assertions, writing, "While the world sanctions Russia for its barbaric atrocities in Ukraine, some prefer to make money soaked in Ukrainian blood. Here is @EL_AL_ISRAEL accepting payments in Russian banking system ‘Mir’ designed to evade sanctions. Immoral and a blow to Ukrainian-Israeli relations.”

If only Kuleba had cared to check, responded the airline, he would have discovered that Mir had been blocked by El Al since February 28.

With so many Ukrainian government officials criticizing Israel without basis and with such overt nastiness, it is difficult to view today’s Ukraine as any different than the Ukraine of the past, as it relates to antisemitism and the Jewish experience. Certainly Ukraine is in a terrible situation, but then so is Israel and it is simply not plausible that Ukrainian officials fail to understand this.

From the Wall Street Journal:

Israel had no choice but to reach a strategic agreement with Russia to fight against Iran and its proxies. In protecting itself from terrorist aggression, Israel must consider Russia’s presence in Syria and secure Mr. Putin’s agreement for airstrikes against targets there. This arrangement, which began under Prime Minister Benjamin Netanyahu, renders Israel dependent on Russia’s goodwill even now, during Mr. Putin’s worst aggressions to date.

We are doing the best we can, and still Ukraine and Ukrainians curse us, the Jews of the Jewish State of Israel.

But it doesn’t matter. Our hearts still bleed to see Putin’s reign of terror over the citizens of the Ukraine on our screens. We still find ways to give to and support the Ukrainians, in spite of the vicious nature of the past, in spite of the reluctance of some of us to let go of history and the memory of our sojourn in the Ukraine. Because that is who we are.

There may be some of us that are of two minds about the hero worship of Ukraine and Ukrainians. Nonetheless, what’s wrong is wrong.

This invasion is wrong.
And Putin is a very evil man.