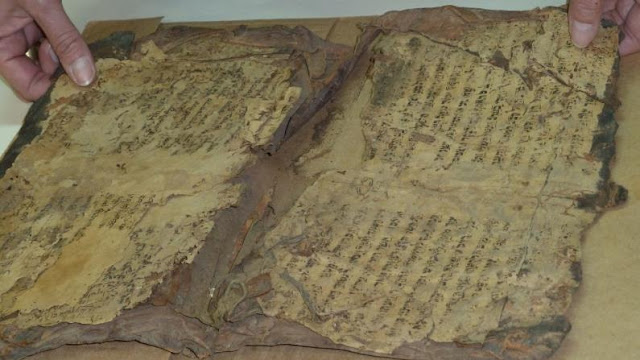 Israeli media reported last week that the tiny remaining Jewish community of Egypt recently discovered a new collection of old Jewish documents, known as a genizah, that had been buried in a cemetery in Cairo that was being refurbished in a joint project with American organizations.
Previous genizahs found in Cairo have been invaluable in understanding the history of the Jewish community there.
However, before the community could do anything about it, the Egyptian Antiquities Authority entered the cemetery and - without any supervision from any Jewish authorities, and apparently without even trying to use modern preservation methods - grabbed the huge collection of documents, stuffing them into bags for 48 hours, and took them away.
It is theorized that the Egyptian government was worried that the documents would be smuggled to Israel so they decided to grab them all now, against the wished of the remaining Jews in Cairo, whose relatives might be mentioned in the collection.
It is unknown how old the genizah is. No one had had the chance to study it yet. The Bassatine cemetery is the second oldest Jewish cemetery in the world, built in the ninth century. The burial plot for the genizah belonged to the Moussiri family, who immigrated to Egypt from Italy in the 18th century.
Ahmed Gendy, an Egyptian professor of Jewish and Zionist Studies who has studied the famous medieval Cairo genizah confirms that the Egyptian Antiquities Authority has been negligent on how they handled that priceless collection. When he would request an item from the genizah to study, he said that they would bring them to him in cloth bags, where insects and humidity could damage them.
Nevertheless, he supports the antisemitic actions of the authority by invoking his own antisemitism:

What the members of the Egyptian Antiquities Authority did by transferring the contents of the discovered Genizah is right, from the reality of the first experience that witnessed the theft or sale of the contents of the ancient Genizah.
What the Jewish community did most likely was done in coordination with the Israeli authorities, in order to internationalize the issue, so that the international community and its institutions would pressure Egypt to implement what the members of the community want in Egypt, on the basis that what was discovered may be linked to Jewish families, and that they do not belong to the Egyptian government. But the fact that members of this sect live in Egypt, and hold Egyptian citizenship, makes the issue of their resorting to the American embassy in order to pressure Egypt on this issue reprehensible, and confirms what we mentioned earlier in another place about the Jews of their constant feeling of isolation and lack of belonging to the countries in which they live.

The community saw that the Egyptian authorities were stealing their property from their own cemetery and ignoring their protests, so they appealed to the Americans who were also working on fixing up the cemetery. This "expert" who understands how little the Egyptian Antiquities Authority cares about the preservation of priceless Jewish items says that this is proof of how Jews in Egypt aren't really patriotic Egyptians.
As far as whether Israel has the right to these documents: The Egyptian Jewish community in Egypt is reportedly down to only 3 members, while there are over 50,000 Egyptian Jews in Israel. Tens of thousands of Egyptian Jews in Israel should have a large say on their own relatives' possessions, especially when the Egyptian authorities' interest in those items is more to keep them away from Jews than to benefit from them. As with priceless Jewish objects from Iraq and Yemen, it is disingenuous to say that the antisemites who drove out the ancient Jewish communities out of their countries should have the rights to the possessions of those very people they expelled.