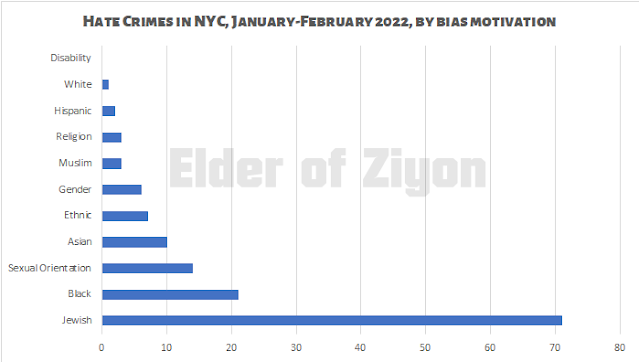 Things are getting even worse for Jews in New York City.
In January, the number of hate crimes in the city went up 75% compared to January 2021. However, most of that increase came against Jews - anti-Jewish hate crimes increased 275% in January, from 4 to 15.
February was not only worse, but much worse.
Hate crimes against Jews in New York City skyrocketed 409% compared to the same month in 2021, from 11 to 56. That means that there were nearly four times as many hate crimes against Jews in February compared to January.
How does that compare to the scourge of Islamophobic hate crimes that we hear so much about?
In those two months, there were exactly three hate crimes against Muslims. And 71 against Jews.
Yes, one is too many. But when there are over 23 times as many of one crime compared to another, making them sound equivalent is not only irresponsible - it is intentionally misleading.
Those who feel that they cannot mention antisemitic incidents without reflexively including Islamophobia are minimizing antisemitism.