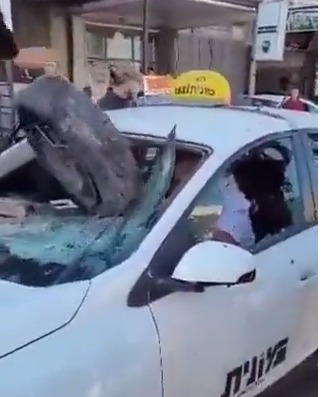 An Israeli taxi driver, who is apparently Jewish, decided to get his car repaired at an Arab shop near Nablus. That decision almost cost him his life.
In a terrifying video, you can see a crowd of Palestinian youths surrounded his car, smashed all his windows with large rocks (and a tire), stole his phones and tried to drag him out of the car. One tried to stab him.
Al Marsd is a news site that is mostly read by Saudis. The reactions to the video at the site included many who were supportive of the Palestinian attackers.

From Shabwah, Yemen, I dedicate my greetings and respect to these heroic men who taught this unclean pig a lesson that he will not forget.
Those who defend the Jew, surely you are Jews like him

But other voices entered the conversation who were shocked at the video, or used it as a reason to attack Palestinians:

Palestinians are really terrorists. What is the fault of the taxi driver, may God curse them?
[sarcastic] Hitting an unarmed elderly person who is running for a living by taxi... God bless the men of Hamas, huh, death to the old man and victory to Palestine.
Palestinians are known for their barbarism and demagoguery
all of them are ignorant, barbaric, Palestinians
I hope after the video, Israel wipes out Gaza
Young people with immature minds, is there a law that criminalizes the entry of an Israeli taxi driver into your city? You enter occupied Israel every day and they allow you
The Palestinian is a cowardly being who lived on treachery, betrayal, selling honor and selling land...
May God strengthen Israel against you, you scum
Some say Palestinians have courage, by God, they are cowardly cowards, beating a defenseless human being

In general, there were more "up" votes for the comments that were pro-Palestinian, but there are plenty of commenters who really dislike the Palestinians.