Mark Oppenheimer, who recently wrote a book about the Tree of Life massacre in Pittsburgh, wrote an op-ed for the Wall Street Journal where he re-assures American Jews - don't worry about antisemitism unless you do something Jewy, like go to synagogue, wear a kippah or shop in a kosher market.

It seems that violent attacks on Jews in the U.S. have become a regular occurrence, like natural disasters. There were deadly shootings at synagogues in Pittsburgh in October 2018 and Poway, Calif., in April 2019, then at a kosher market in Jersey City, N.J., in December 2019. Last weekend, a rabbi and three congregants were taken hostage at Congregation Beth Israel, a Reform synagogue near Fort Worth, Texas.
...
But the reality of Jewish Americans’ security is more complicated. The recent heightened antipathy toward Jews hasn’t been focused on the general Jewish population. Rather, it has targeted the shrinking minority of Jews who regularly do Jewish things in Jewish spaces—go to synagogue, for example, or shop at kosher markets. For Jews who “Jew it,” to use a friend’s favorite locution, even the very occasional synagogue attack, while statistically insignificant, makes every religious service a little more tense.
On the other hand, for people who are Jewish but don’t do Jewish things, the U.S. is less oppressive than ever. Fifty years ago, there were still meaningful prejudices and structural obstacles that plagued the most secular, non-affiliated Jews. There were country clubs that didn’t allow Jews (or only allowed a token few), and there were law firms and Wall Street banks where making partner was that much harder for a non-Christian.
But I have been writing about American religion for 25 years, and in that time, I have not encountered a single business, school or social club where Jews are unwelcome. I am sure there are outliers somewhere, but let’s put it this way: The average Jew is no longer worried about being excluded by gentlemen’s agreements at law firms, restrictions at clubs or real estate covenants. These are artifacts of the past.

[O]utside the Orthodox world, we are becoming a people who never encounter anti-Semitism in school or at work and seldom enter the spaces where anti-Semites look for us, like the synagogue, JCC or kosher market. For such Jews, there is nearly zero risk of being victimized by anti-Jewish violence or bias. Simply put, Jews who go to synagogue are terrified of anti-Semitism right now. Jews who don’t have no reason to be.
...
Yet it will be an ever-shrinking percentage who will actually be in harm’s way. The Jews at risk of anti-Semitic attack will include the small but growing number whose clothes make them targets, like many Orthodox, including Hasidim. Then there are the teachers at Jewish schools, the kosher butchers, the nurses in Jewish homes for the aged. And, of course, there will be those eccentric holdouts: Jews who continue to enter places like synagogues, having decided that praying with fellow Jews is worth the risk of dying with them.

This essay is fundamentally wrong and offensive on a number of levels.
Allowing Jews into country clubs might have been a wonderful accomplishment in the 1960s, but there are different spaces where proud Jews are not welcome today. Like if you want to participate in the Women's March. Or run for student government at university. Or attend an online seminar on antisemitism.

For someone who writes about Jewish issues, Oppenheimer sure seems not to understand how antisemitism morphs in every generation to something new. Country clubs aren't the problem - campus and "progressive" spaces are.

As far as the "small" number of Jews whose clothes make them targets, according to Pew, 25% of those who identify as Jewish by religion wear something identifiably Jewish on a typical day, like a Star of David. That isn't that small.

What about his characterizing Jews who are public about their Jewishness as "eccentrics"? Someone emailed him and he responded that he was writing this ironically: 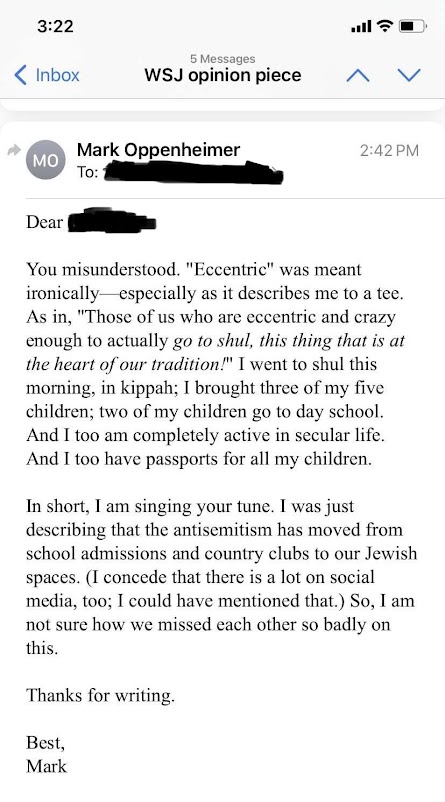 I believe him - he is an editor at Tablet, he hosts a Jewish podcast. But if he was going for irony, this essay missed that mark by a mile.
In the essay, Oppenheimer doesn't say that there is anything admirable about Jews who are publicly Jewish. On the contrary, the clear impression he gives is that they are eccentrics, fanatics, outliers. The haredim who are regularly attacked in Brooklyn? Don't worry, normal Jews don't have to worry about being attacked. Even though he allows that many Jews are personally upset when such attacks occur, the tone of the piece is that assimilated Jews don't have to let this bother them. Not one word in this piece made it appear that Oppenheimer isn't advocating assimilation as a magic force field to ward off antisemitic attacks.
Whether he meant it or not, the message of the article is that there are enlightened Jews who are indistinguishable from the gentiles - and then there are the rest.