Teddy Roosevelt's speech to a Jewish group in 1911. They don't make 'em like that anymore. 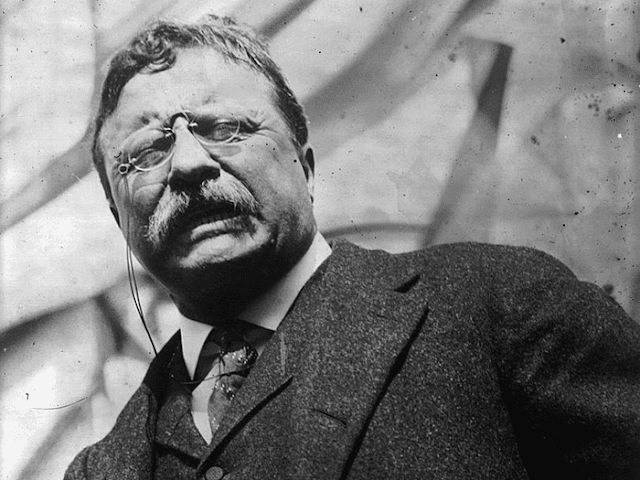 Two years after he left the White House, Teddy Roosevelt spoke at a New York dinner for the Union of American Hebrew Congregations. The New York Times, January 19, 1911, covered his speech.

Col. Roosevelt. said with particular emphasis that he believed that a few hundred years from now the Americans would look back with amusement at the "reluctance which one set of their ancestors had manifested at mingling with another set of their ancestors."
" I became acquainted with the east side, the greater part of the population of which is Jews, when I was Police Commissioner," Mr.  Roosevelt said. " I earnestly wish that every American, for his can sake, could have the same experience. It taught me that the differences that seem to keep asunder the different peoples of this city are due to ignorance and misapprehension more than to any other cause. If we can only grow to sympathize with one another, we will quickly see that the things that divide us are superficial and the things that unite us are fundamental." The Colonel's remarks were cheered with enthusiasm....

All the diners sprang up from their tables and cheered when Mr. Roosevelt rose to speak. Mr. Roosevelt said: "I come here to-night to speak to you a few words of greeting, and to speak to you as fellow Americans.
"I don't feel that in acting as I always have to my fellow Americans of Jewish faith I deserved any praise. I would have deserved blame if I hadn't always treated them the way I have. I've met good Jews and bad Jews. good Christians and bad Christians. Whenever I have met a good man I have always tried to stand by him. Whenever I have met a bad man I've always cinched him. In both cases it would have been waste of time to have asked me to alter my course.
"I have been thrown much with my fellow citizens of the Jewish faith. When I worked with them I didn't know and didn't ask their faith. As I once said to a former member of my Cabinet--Straus, here - 'One of my favorite books is the Book of Maccabees.' White I wish most earnestly to do all I can to bring about  the reign of peace, and wish the United States to do this, too, I wish to one peace with justice, and not weakness or timidity. I don't want to see the spirit of the Maccabees to die out.
"In my regiment at Santiago, after one of the fights, I promoted some men for gallantry. I knew nothing about them. Two I found out after were Catholics, two were Protestants. and one was a Jew."
One of the diners let out a shrill whoop, and Col. Roosevelt raised a laugh by exclaiming, "That's a real Rough Rider cry!"
"I didn't know or care what their religious faith was, all I wanted to know was whether, in a crisis, they'd 'stay put,' " Mr. Roosevelt went on when the laugh subsided, "Mr. Schiff probably remembers my visiting the Montefiore Home two years ago and meeting a member of my old regiment. That man was a Jew. He had been wounded in the first day's fighting at Santiago. I had sent him to the hospital. A few days later a rumor went out that we were going to assault the enemy's line, next morning. That Jewish soldier of mine left the hospital and came back to fight under me. I think he acted in an unconstitutional manner. You can imagine how that shocked me.
"When I was Police Commissioner I wanted the right kind of men on the force, but I never asked their religious faith. An English clergyman came over here to start an anti-semitic crusade. Some Jews asked me to stop his meetings. I refused because I am against stopping anyone from pitching into anyone else. Soon after, the clergy-man himself came to me and asked me to protect his anti-semitic meetings from interruptions by Jews. I sent thirty Jew policemen to protect him.
"In making the future American to be the highest possible type, it is our duty to accentuate the good qualities of each race and to reward each individual according to the high quality of citizenship he shows, no matter what his race is..
"There are countries where patriotism is shown by persecution. It takes the form of terrible outrages by Christians on Jews or by non-Christians on Christians. But this is an infamous form of patriotism and it is a source of degradation to the nation that does the wrong. No nation nowadays can rise by trampling down another. The motto on which we act here is 'All men up.' It is a much safer motto than 'Some men down.'
" Mr. Schiff alluded to my having Straus in my Cabinet. You'd have had to bring strong pressure to bear on me to keep him out. Perhaps I shouldn't compromise him by saying so. but he has always been a strong friend of mine. I must ask Mr. Schiff not to make this public in Wall Street, however. I'd have put Straus in my Cabinet anyway.
"But it was an additional pleasure to have him there because he was a Jew. The one prime lesson which should be taught to every man in this country is that if he acts like a good citizen the highest rewards are open to him.
"It has always seemed to me that the Jewish race possesses two qualities inherent in the old native American. The Jew is eminently practical, and .at the same time he is an idealist. But although both the Jews and the native Americans,have both these qualities in common,  this mustn't keep them in separate compartments. The one quality I don't want to see developed in this Nation is the quality which applauds the loftiest sentiments provided they don't have to be lived up to.
" There is just one matter in which 1 want to see each race which composes this Nation show a separate identity. When I deal with a crook, I don't care whether he is a Republican crook or a Democratic crook. But I will always tend to hit the Republican crook a little harder because I feel a little responsible for him. It is the duty for all Americans to protest against dishonest public servants. But when a public servant of one nationality is dishonest his fellow-members in that race should especially punish him."
...Mr. Roosevelt concluded by saying that he was "only radical in trying to apply old moralities to new conditions."
" I believe in using any expedient the new condition warrants," he said. "I preach the old fundamental verities. My critics say I preach platitudes. The Decalogue is platitudinous—in theory. but not in practice. While we in this country need intellectual development, we need character more."

The episode that he mentioned with the antisemite was described in Tablet magazine in 2009, reproduced in The Atlantic, with another quote about the incident from Roosevelt:

"While I was Police Commissioner an anti-Semitic preacher from Berlin, Rector Ahlwardt, came over to New York to preach a crusade against the Jews. Many of the New York Jews were much excited and asked me to prevent him from speaking and not to give him police protection. This, I told them, was impossible; and if possible would have been undesirable because it would have made him a martyr. The proper thing to do was to make him ridiculous. Accordingly I detailed for his protection a Jew sergeant and a score or two of Jew policemen. He made his harangue against the Jews under the active protection of some forty policemen, everyone of them a Jew! It was the most effective possible answer; and incidentally it was an object-lesson to our people, whose greatest need it is to learn that there must be no division by class hatred, whether this hatred be that of creed against creed, nationality against nationality, section against section, or men of one social or industrial condition against men of another social and industrial condition. . . . "