No, Palestine was never a haven for religious freedom - until Israel

At the American Muslims for Palestine conference in Chicago over Thanksgiving weekend, one of the speakers was Omar Suleiman, who has been praised as a new type of moderate Muslim leader - he even once gave the opening prayer at Congress.
Suleiman gave his vision of a future Palestine, one where Jews and Christians are not expelled, but dignified, under supposedly benevolent Muslim rule.

Is Palestine a Muslim issue? It's a Muslim issue, but it's not just a Muslim issue. People will say well, you know, the Muslim vision for Palestine is one in which Jews do not exist, in which Christians do not exist, in which people are wiped out and oppressed. And I respond to them and I say have you not read about Umar Ibn Al-Khattab, entering into Palestine? That's my vision of Palestine.
Umar Ibn Al-Khattab was offered to pray in the church and he says to the Patriarch, "Let me walk out of here, because if I pray here then some overzealous Muslims will come later on and say Umar Ibn Al-Khattab prayed here and they'll turn this into a masjid." And so out of his wisdom and sincerity he walked out and he prayed in a place that is today masjid Omar.
My vision for Palestine is one that...doesn't exclude religious communities, doesn't white people out. My vision for Palestine is what Palestine was! It's not a false hypothetical situation in the future: it's one that existed!  People dignified and held high! That's the Palestine that I want.
So don't come to me with your present reality of ethnically cleansing Palestinian Muslims and Christians and saying we have to do this because if we cede to these barbaric people then they will wipe us off the planet. That's not true and we have a history that is older than seven[ty] years. 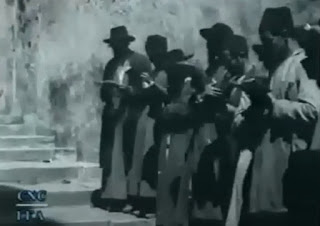 In times gone by these native Jews had their full share of suffering from the general tyrannical conduct of the Moslems, and, having no resources for maintenance in the Holy Land, they were sustained, though barely, by contributions from synagogues all over the world. This mode of supply being understood by the Moslems, they were subjected to exactions and plunder on its account from generation to generation (individuals among them, however, holding occasionally lucrative offices for a tune). This oppression proved one of the causes which have entailed on the community a frightful incubus of debt, the payment of interest on which is a heavy charge upon the income derived from abroad.
... The Jews are humiliated by the payment, through the Chief Rabbi, of pensions to Moslem local exactors, for instance the sum of 300£. a year to the Effendi whose house adjoins the ' wailing place,' or fragment of the western wall of the Temple enclosure, for permission to pray there; 100£. a year to the villagers of Siloam for not disturbing the graves on the slope of the Mount of Olives ; 50£ a year to the Ta'amra Arabs for not injuring the Sepulchre of Rachel near Bethlehem, and about 10£ a year to Sheikh Abu Gosh for not molesting their people on the high road to Jaffa, although he was highly paid by the Turkish Government as Warden of that road. All these are mere exactions made upon their excessive timidity, which it is disgraceful to the Turkish Government to allow to be practised. The figures are copied from their humble appeals occasionally made to the synagogues in Europe. Other minor impositions were laid upon them which they were afraid to discontinue to pay, such as, to one man (Moslem) for superintending the slaughtering of cattle by themselves for food, to see that it is performed by the Sephardi Eabbi who has purchased his license to do it. Periodical presents likewise of sugar, etc., to the principal Moslems at their festivals.
The Hebron Jews were more exposed than even those in Jerusalem to rough usage from the natives, and they had suffered greatly from the tyrannies of the brutal ' Abderrahhman el 'Amer.

This barely scratches the surface.

An 1852 account describes how Jews had to hide any indication of owning property or goods, because the Arabs would steal them. Jews in Palestine suffered pogroms. - not just in 1929.  The word "Jew" was (and remains) an epithet in the Arab world.

This is the life that Omar Suleiman wants Jews to return to.

It turns out that Suleiman has a history of bigotry that he tries to hide behind his words pretending to be tolerant. The late Petra Marquardt-Bigman wrote about him at length for JTA in 2019.
And under the Jewish rule that Suleiman calls "ethnic cleansing" there are more Muslims living in Jerusalem than at any time in history. There are more Muslims visiting Al Aqsa - under Jewish supervision - every week than had ever visited in all recorded history under Muslim rule.
But all you really need to know about Suleiman is what he said at the end of his AMP speech, saying that Jewish history in the land does not exceed 70 years. He denies Jewish history itself. He denies that Jewish holy places are Jewish, even though they all pre-date the Muslim invasion of the land by over a thousand years.
Anyone who denies Jewish history is an antisemite, no matter how wonderfully he speaks.
(h/t kweansmom)