Holocaust Education and “The Elephant at the Table” (Judean Rose)

Holocaust education is something that should be part of every history or social studies class. Or so you would think. After all, the Holocaust is an historic event, a catastrophic event, an attempt at genocide. It happened. People are yet alive to give testimony that this is so.

We know however, that in many cases, this particular event in history, the event known as the Holocaust, goes unmentioned in elementary and high school curriculums. Artist and Master Holocaust Teacher Dorene Schwartz-Weitz aims to change this. She wants mandatory Holocaust Education in every school in the United States. And she wants that education done properly. Schwartz Weitz wants Holocaust Education curriculums to be not only mandated but regulated.

How do we know that the state of Holocaust Education within the United States is a failure? A 2020 poll revealed that 63% of the respondents had no idea that “6 million” Jews had been murdered.* Of those who were aware that a number of Jews had been murdered by the Nazis, 36% believed the number of victims to be 2 million or so. A further 48% of those polled could not name a single concentration camp. They had apparently never even heard of Auschwitz, the most infamous of all Nazi concentration camps.

The Holocaust occurred only 75 years ago, but is largely forgotten by Americans. Some educators in, for example, Florida and Texas, feel that Holocaust denial should be a part of Holocaust Education, and treated as valid opinion. Not to mention the staff member who had third graders reenact the Holocaust and told them that Jews caused the Holocaust "because they ruined Christmas."

Whether all of this is from ignorance or antisemitism, it is (and sometimes isn't) hard to say. But we do know that something must be done. Dorene Schwartz-Weitz is doing her part, having made it her life’s work to improve and make mandatory, Holocaust Education in schools across America. A busy artist whose uncle, aunts, and cousin were Holocaust Survivors, Dorene gave generously of her time to tell us about her work:

Varda Epstein: Tell us something about yourself, your background. How does one become a master teacher of the Holocaust?

Dorene Schwartz-Weitz: If someone would have shown me a video of my future, I'd never believe I'd become someone who has devoted her life to working passionately on promoting Holocaust Education. My original career trajectory was to become an artist. And indeed, my first major gallery opening was on 57th Street at the age of 25.

Though I was raised by an extended family of Holocaust Survivors, the subject was always "the elephant at the table" (as Jews, we were always at the table, lol). The noted Holocaust historian and Survivor, Dr. Yaffa Eliach, zt"l, was my high school teacher. But antisemitism wasn't part of my everyday life experience.

There was, however, always an undercurrent of antisemitism prevalent throughout my teaching career with what unfolded and what I came to witness was a lack of basic understanding of what it was to be a Jew. The culmination of all this arrived one day when a student—a high school football star in the running for a full scholarship—refused to do the required assignments. When confronted, he said, "You didn't learn your lesson. You should be sent back to Auschwitz".

Informed of the incident, the administration of the school failed to support me. Instead, they turned the tables "and then they came after me" with accusations regarding my teaching abilities.

It was then that I wrote, coordinated and taught, "Portraits of Survivors,” an interdisciplinary Holocaust Education program, and went back to Rutgers for a Master Teacher of The Holocaust certification. I was thereafter awarded plaques inscribed with, "Excellence in Teaching.” 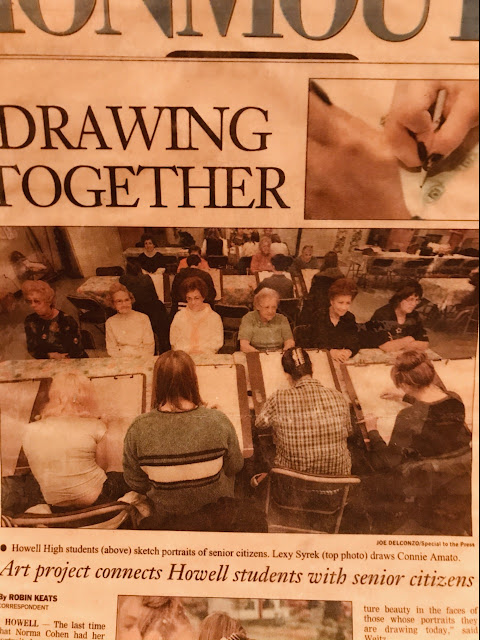 Varda Epstein: Not long ago, you told me that teaching the Holocaust “should not be like teaching kids dangers of smoking when they haven’t started.” Why shouldn’t the Holocaust be taught as a cautionary tale?

Dorene Schwartz-Weitz: There is a phenomenon I became aware of while teaching the Holocaust. I had a student who seemed so dedicated, supportive and involved until I realized it was he who was carving those swastikas into the table where he sat. Apparently, when teaching, i.e., anti-smoking or sex ed. you get students who will suddenly start smoking and students who will start to engage in premarital sex.

It's called "The Boomerang Effect" and has to do with the fact that those in this age group are often rebellious.

Varda Epstein: Can you talk about the principal in Florida who refused to say that the Holocaust is a fact? What are your thoughts on this? How can we address top down Holocaust denial from our educators?

Dorene Schwartz-Weitz: More and more we are seeing the dire need for school to be a safe place. Creating this environment begins from the top down in setting the atmosphere. Administrators need to first be educated, have a curriculum in place, and an agreement as to how to best achieve a result where students know their well-being is the top priority.

Opening the door for Holocaust Denial by redefining it as "others' views and opinions,” sets the stage for conflict, not resolution. Would we give sex offenders a voice in sex education? I would dare to say that denying the Holocaust, with all its ramifications, is far worse.

Varda Epstein: How can educators teach the Holocaust to youth in an accurate way without sugarcoating the truth? And if we get that far, how do we avoid traumatizing them?

Dorene Schwartz-Weitz: The concept of having a whole school work on Holocaust education as an interdisciplinary program creates the environment where everyone knows they are working together toward a common goal of learning so as to promote an understanding of how this could have happened, and thus be prevented.

Moreover, having a student meet with a Holocaust Survivor so as to listen to their life's story of survival makes the unspeakable more humanely digestible. After 9/11, such meetings became all the more valuable with our students desperately seeking ways to survive psychologically or in the face of terror.

In the future, we will need to rely on resources such as Steven Spielberg’s interviews of Holocaust Survivors, and the vast archives at Yad Vashem, Bad Arolsen, and the like.

Varda Epstein: Where are we failing in regard to teaching the Holocaust?
Dorene Schwartz-Weitz: With regard to the goals of teaching lessons learned from the Holocaust, we fail in that there isn't first an agreement as to the necessity for Holocaust Education in its own right, rather than as a tagline to Genocide Education, where the Holocaust may be merely mentioned, if at all. There needs to be an awareness of the Holocaust as the turning point in civilization, on all levels. When the discussion encompasses other times and places where there were unspeakable genocides, it waxes over the very facts. The Holocaust happened at a time and in a place where science, art, music, and education were in top form. This wasn't happening to some uncivilized population unable to protect itself, thus making for the possibility of, “it can happen again.”
We need a Holocaust Mandate instituted as a requirement for a high school graduation diploma. There needs to be an agreed upon curriculum implemented by administrators and teachers, and supported by parents.

Varda Epstein: How can we improve Holocaust education in the classroom?

Dorene Schwartz-Weitz: In writing a Holocaust curriculum, there needs to be age appropriate information paired with exercises that promote an understanding of how to process and direct those goals so as to improve our relationship to the Holocaust. Those who have gone through Holocaust Education programs, Holocaust Survivors, children of Holocaust Survivors, and victims of antisemitism are our greatest resources in conveying the message. Students should know what a Jew is, along with some Jewish history (including prior persecutions), and current events as part of the basic foundation of understanding. Additionally, students should be made aware of the WWI events that led to Hitler’s, y"s, rise to power, which in turn, led to the near accomplishment of his main goal: the Final Solution.
All of the above should be included in the Holocaust curriculum.

Varda Epstein: How can parents supplement their children’s understanding of the Holocaust at home?

Dorene Schwartz-Weitz: After sitting to draw the portraits of a couple who had survived the Holocaust, one of my high school students said, "I didn't believe the Holocaust happened, but when I saw all these old people getting off a bus on this cold icy winter day just to talk to us, I knew they were not coming to make up stories.”

It later became known that the student's parents were Holocaust deniers. Thus separated from their influence, he was able to form his own opinion.

We cannot assume that parents will be supportive. Some need to first be educated. On the other hand, there are many parents who want to help and do so by chaperoning or taking their children to a Holocaust museum or movie, and then discussing the lessons to be learned.

Varda Epstein: What would you say is the main takeaway that we should want our children to have from the historic catastrophe that is the Holocaust?

Dorene Schwartz-Weitz: The world is made of many nations, religions (4,200!), and creeds. Though we are sometimes seemingly so different, we share a most common need and goal for communication, acceptance, understanding and especially peace and love. By opening ourselves up to this awareness, we can all enjoy our shared lives.

Yes, it can happen again, but with Holocaust Education you will know there is a choice in how to respond to your own or others' needs for help. There are still many Righteous Gentiles being honored for their unbelievable courage when putting their own lives and the lives of their loved ones, on the line to save a Jew.

Varda Epstein: What does the future hold for you as a Holocaust educator?

Dorene Schwartz-Weitz: Things have drastically changed over the past two years in the world. We are living in the most challenging of times. G-d fearing people see "The Hand of G-d" in all unfolding.

Growing up after The Holocaust, in The Golden Medina, we had childhoods filled with attainable dreams and hope. As a parent/grandparent I pray my children and grandchildren will enjoy the same opportunities afforded us—and especially in regard to having the ability to live their lives as practicing Jews.

As Jews, we are taught to be accepting and respectful of others. Hillel summarized the entirety of the Torah by stating the most important commandment is to, "Love thy neighbor as thyself.”

As a Holocaust Educator, I see that our work, in many ways, has just begun.

If you would like to help assist the goals of education toward prevention, here's what all of us should do ASAP:

2. Learn more about the issue of mandatory education here: "If You Don't Have Mandatory Holocaust Education, Demand It"

3. Add your voice and receive updates about mandatory Holocaust Education on Facebook by joining our group: Campaigning to make Holocaust education mandatory.

*It is important to note that “6 million” was only an estimate. The actual number of Jews murdered in the Holocaust is closer to 7 million and still counting, as mass graves and bodies continue to be discovered in various parts of Europe.