If Jews were as insecure as Arabs: "Kellogg's engages in cultural appropriation of Israeli Kariot cereal!"

After seeing another idiotic tweet about how Israel is stealing Palestinian cuisine (and, no, shakshuka is in no way Palestinian) I wondered what it would be like if Jews were as insecure about their food inventions as Arabs seem to be.
Think about Kariot.
Kariot is an Israeli cereal that placed chocolate or nougat inside a pillow-shaped grain cereal. (Kariot means "pillows.")
It was created in Israel in 1994. A very similar cereal was introduced in the US by Kellogg's as Krave in 2012 after success in Europe. 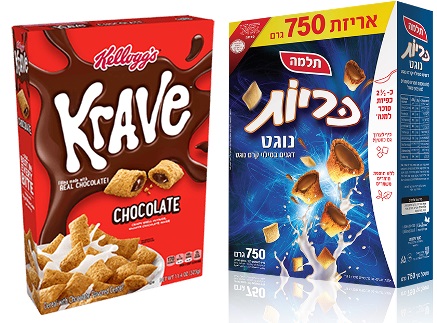 Kellogg's has stolen an Israeli food!
Nowhere in their literature do they mention the origin of their cereal. One would think it is ...American! (Or British!)
Cultural appropriation! Disrespect for Israeli culture!  Theft of sugary breakfast innovations!
Imagine how utterly stupid that would sound. No one would take it seriously. But there have been hundreds of articles decrying Israelis putting their own twist on foods like falafel and shakshuka, using the term "Israeli salad," freaking out over their popularizing hummus worldwide with the brand name Sabra.
Food, like language, moves and morphs as it goes through different cultures and geographies. No one owns it. Jews would be amused if Palestinians claimed Bissli or matzah or sabich as their own. And if they make a sabich that is better than the Israeli version, or if they want to make a new Palestinian food that uses cherry tomatoes, great.
Yemenis don't accuse Saudis of stealing their foods, nor do Turks get upset when their cultural foods are consumed throughout the Arab world. The constant accusations of "cultural theft" are only hurled at Israel.
Cuisines always change as they move through time and place. So does antisemitism.