On Friday, the Jerusalem District Court overturned the ruling the previous week from the Jerusalem Magistrate Court saying that Jews cannot be prevented from saying silent prayers on the Temple Mount.
Given that so many Muslims had made such a big deal over the initial ruling, one would think that they would celebrate this new ruling, right?
Nope - it is barely being reported. And most of the reports are dismissing the new ruling as being irrelevant, by the same people who claimed the initial ruling was cataclysmic.
Sheikh Kamal al-Khatib, deputy head of the Islamic movement inside the Palestinian territories, said in a press statement that the new court ruling "is a kind of fraud and igniting public opinion with a fair position of the Israeli judiciary, but the truth has proven that the judiciary is an arm of the Israeli establishment."
Palestinian lawyer Khaled Zabarka said that the Hebrew media was trying to "mislead public opinion."
Director General of the Waqf, Sheikh Muhammad Azzam Al-Khatib, said: “According to the information available to us, there is no decision to cancel the silent prayers in the blessed Al-Aqsa Mosque by the Israeli Central Court."
What he apparently means is that the Central Court ruled that since Rabbi Aryeh Lippo was shown to be moving his lips, even though his prayers were silent, it cannot be said that he was not doing "visible prayer" - and Muslims say that the ruling still allows invisible prayer.
Meaning that Jews should not be allowed to even think prayers.
Meaning that their goal, as always, is to ban Jews from the Temple Mount altogether. And this is something that they say explicitly in Arabic all the time, with daily headlines showing Jews visiting the site saying that they are "provocative" and "storming."
This court kerfuffle is just an excuse for Jew-haters to promote the lie that respectful Jewish prayer can somehow ignite a regional conflict.
Arab op-eds screaming about how the "silent prayer" decision will lead to the building of the Third Temple are still being published even after the new ruling.. Muslim organizations worldwide continue to condemn the initial court ruling. Arab social media is still filled with photos of Jews praying even today. 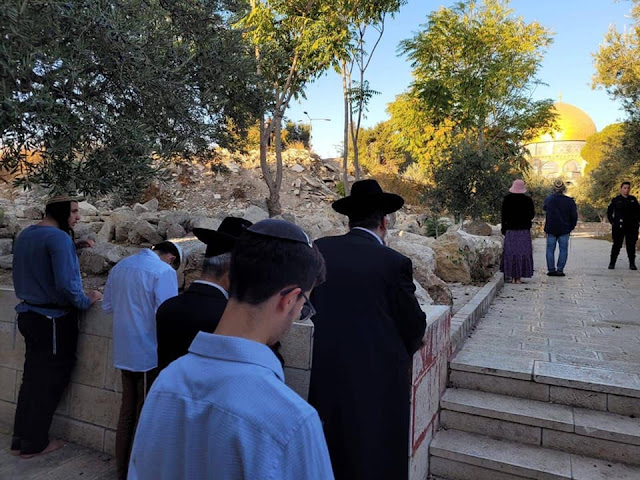 The unfortunate thing is that Israel's Public Security Minister Omer Bar Lev has swallowed the antisemitic lies and adopted them as his own.
He announced that Israel Police appealed  the ruling because "a change in the status quo will endanger the public peace and could cause a flare-up."
"The State of Israel advocates freedom of worship and prayer for all, however, in view of the security implications, the status quo must be upheld that the prayer of Jews on the Temple Mount will take place next to the Western Wall and the prayer of Muslims will take place in al-Haram al-Sharif," he said.
Evidence from the past few years shows that this is not true. Jews have been praying, openly and in groups, on the east side of the Temple Mount without incident, proving that the apocalyptic predictions from the "experts" are thoroughly wrong.
There isn't a grassroots opposition to Jews quietly praying. There is official incitement from self-appointed Muslim leaders to spark such opposition. The reactions to the original court ruling are an affected outrage, not a genuine outrage - they are meant to rile people up. And for the most part, these efforts are failing.
But some Jews are so afraid of defending their rights that they are happy to adopt the Muslim incitement narrative as truth. This emboldens the haters to redouble their efforts to rid Jerusalem of Jews altogether, which is the "status quo" of 1948-1967 that many Muslims really desire.
Only when Jews actually fight for their rights will Jews get those rights. Proud Jews must combat the the meek dhimmis who think they must do what their Muslim masters say.