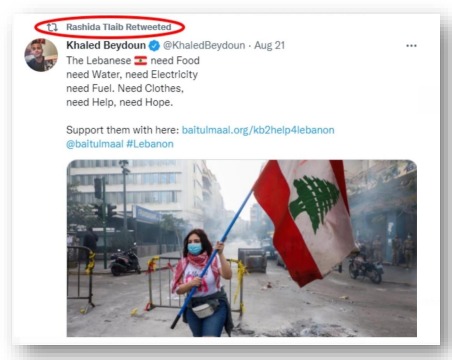 Rashida Tlaib, faux humanitarian, retweeted an appeal to send money to a  charity called Baitulmaal.org, supposedly to help Lebanese people get their basic needs.
Alma, the northern Israel think tank, researched Baitulmaal, because there is a charity with that name associated with Hezbollah.
This isn't that charity - but it is just as bad.
Its current director, Mazen Mukhtar, once said "suicide bombings are an effective way to attack the enemy and continue Jihad."  A 2004 article in the Washington Post notes that Mukhtar had previously run a website aimed at raising funds for the Afghan Taliban and the Chechen Mujahidin. He has also lectured on behalf of Hamas.
More:

Meaning it directly funds terrorists' families.
The UFA has published on Facebook pure Jew-hatred: "We will ask Allah to release our prisoners imprisoned in Nazi-Zionist prisons and release the filthy Al-Aqsa Mosque of the dirtiest Jews.”
Baitulmaal is a member of the "Union of Good," a charity founded by "terror sheikh" Yusuf al-Qaradawi,
There are more links to terrorism listed in the Alma article.
It raises millions of dollars a year, spending all of its funds either on other Islamic charities or in Muslim countries where the money trail can be impossible to follow.
They might be saying they are raising money for Lebanon, but terrorists from Hamas and other groups are almost certainly taking a cut.
Rashida Tlaib wholeheartedly supports this "charity" that channels money to Hamas terrorists.