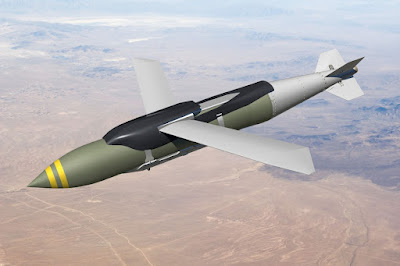 REPRESENTATIVES ALEXANDRIA OCASIO-CORTEZ, RASHIDA TLAIB, AND MARK POCAN are leading a renewed effort to prohibit the delivery of US-made bombs to Israel.
The three progressive legislators submitted an amendment to the annual National Defense Authorization Act (NDAA) that would require the Biden administration to halt the export of Boeing-made Joint Direct Attack Munitions and Small Diameter Bombs to Israel for a year. The bombs were used by the Israeli Air Force to strike targets in Gaza during May’s escalation in violence.

JDAM "is a guidance tail kit that converts existing unguided free-fall bombs into accurate, adverse weather "smart" munitions. With the addition of a new tail section that contains an inertial navigational system and a global positioning system guidance control unit, JDAM improves the accuracy of unguided, general purpose bombs in any weather condition.
The Small Diameter Bomb is a "250 lb precision-guided glide bomb that is intended to provide aircraft with the ability to carry a higher number of more accurate bombs. "
If Israel does not have smart, accurate bombs, it would need to use less accurate and possibly more lethal bombs when defending itself from Hamas (and Iranian proxies in Syria.) If these members of Congress are successful, more Palestinians would die.
But they would welcome that. Dead Palestinians are the best advertisement for the Israel haters. That's why Israel goes to extreme lengths to avoid civilian casualties, and liars like AOC, Tlaib and Pocan scream that the unfortunate civilian death toll resulting from Hamas using people as human shields are really the result of  "indiscriminate" Israeli attacks.
The only people that gain from dead innocent Palestinians are the Israel-haters. This bill  is designed to ensure that result.
Even the drafters of the amendment admit it is just a publicity stunt to get anti-Israel headlines. The amendment implies that Israel targets civilians with precision weapons. That is a libelous lie.
A decent reporter would ask the three representatives whether Israel has the right to defend itself with the best weapons possible to avoid civilian casualties.  Too bad there are so few good reporters around.