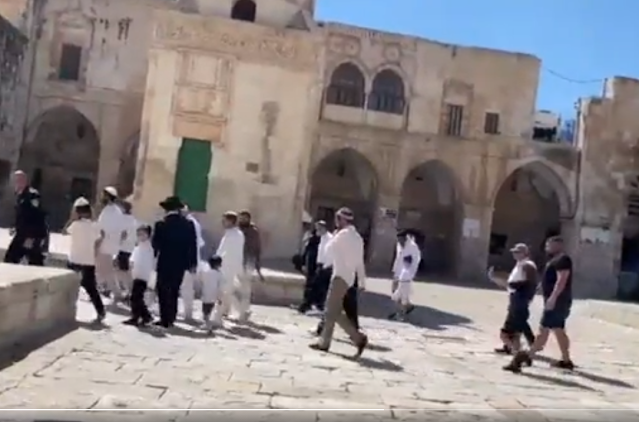 I have not seen it in any Israeli media, but several Twitter accounts in Hebrew (and at least one in Arabic) are claiming that someone sneaked a shofar to the Temple Mount and managed to blow it.
Avri Bloch, reporter for Channel 20, says "A Shofar was sounded on the Temple Mount in the Old City. The Israeli police detained a Jew who, during the Ascent to the Temple Mount on Rosh Hashanah, blew a kosher Shofar 12 times, the minimum amount of blasts needed to be valid."
Tom Nisani, director of the "Temple Mount Is In Our Hands" organization, tweeted,

Two of the pilgrims to the Temple Mount during the holiday made the Shofar sound heard.
They have not been arrested or detained, because as long as we continue to act, the police understand that they have no legal basis.
It is amazing that despite the attempts to suppress the rights of the Jews and hide this discrimination, the Jews do not give up and continue to do and act.

Palestinian network Al Qastal has video that of Jews visiting that they claim was of the Jews who blew the shofar, followed by what might be police escorting two Jews away from the site.

This isn't the first time this has happened. In 2018, a Jew smuggled a shofar on the Temple Mount and blew it until police arrested him.