By 2030, the majority of world Jews will live in Israel

Israel's Central Bureau of Statistics came out with its annual Rosh Hashanah report on Israeli and worldwide Jewish populations.

I looked at the Jewish population worldwide and in Israel since 1970. Here is my graph, with a forecast going to the year 2030: 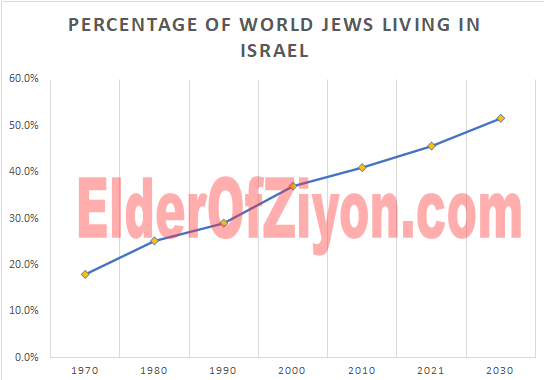 That line is remarkably straight even as over a million Jews moved from the former Soviet Union to Israel in the 1990s it only affected the slope a little bit.
If current trends continue, the majority of world's Jews will live in Israel by 2030. (Actually, it would happen in 2027, but I'm playing it safe because the diaspora population used to be lessening every decade but seems to have bottomed out.)
An Israel that has more than half the world's Jews would be significant, both in terms of Zionism being proven to be a wild success and to give antisemites more reasons to direct their hate at Israel while claiming to be merely expressing political opinions.
It turns out I'm not the first to make this observation. Top Israeli demographer Sergio Della-Pergola said this in 2016, but the media didn't really make a big deal out of it.
It seems hugely important.
Israel has had a plurality of Jews for a while now but we are on the cusp of seeing Israel as the true center for Judaism. Practicing Jews will look for guidance and leadership from Israel.
Already, the biggest innovations in Jewish education come from Israel but, as far as I can tell, they remain in Israel.
While it is too early to know how diaspora Jews and organized diaspora Jewry will respond to this shift, chances are they will feel marginalized and there is potential for catastrophe. Israel and Israeli institutions should be planning now to take on the real leadership role for Jews of all stripes worldwide, or else risk losing them.
The very idea of Jewish unity seems quaint nowadays. It is needed more than ever, and the way to make it happen is to have Jews recognize that their center of gravity is moving inexorably back to where it came from, and to welcome this.