Palestinian police attack two @WashingtonPost reporters. No one reported it - not even the Washington Post! (UPDATE x2) 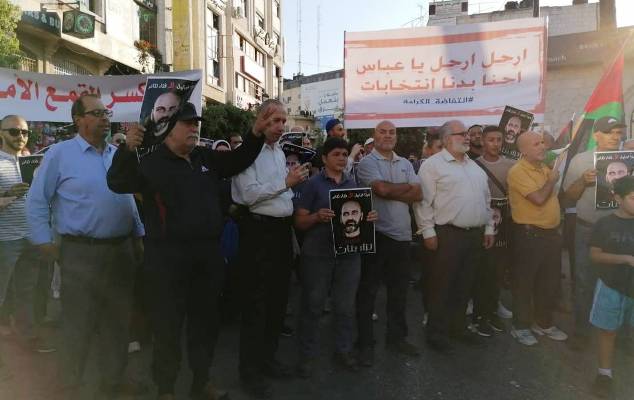 On Saturday, August 21st, Palestinian security forces in the West Bank harassed, abused and threatened a pair of Washington Post journalists, Salwan Georges and Sufian Taha, covering a protest in Ramallah’s Manara Square.
The demonstrators had gathered to protest the Palestinian Authority’s handling of the death of Nizar Banat, a government critic who died in the custody of Palestinian police on June 24.
As police broke up the gathering, a Palestinian policeman grabbed the Washington Post photographer as he was taking pictures of the arrests. The officer seized the camera, held the photographer’s neck and tore his press badge.
Georges explained that he was with the international media and tried to hold onto his camera. But additional security men surrounded him, taking away the camera and telling him: “Here it’s different. We don’t care.”
The police held on to the camera for over an hour, deleting seven photos and preventing him from doing his job. When the camera was returned, both journalists were ordered to leave and told there would be a “big problem” if photos of one of the officers were published.
The Foreign Press Association condemns this egregious behavior in the strongest terms. We call on the Palestinian Authority to sanction the officers who were involved in this incident and to stand behind its past promises to respect the freedom of the press.

A government attacking media is pretty big news, right?
But this story - which happened on Saturday, and this press release issued Tuesday morning - has not gotten any coverage in the media that I could find.
Not even from the Washington Post!
The Washington Post made a conscious decision not to cover an attack on its own journalists. It chose to publish AP's story on the protest in Ramallah, and not the account of its own people on the scene.
The venerable news organization chose to adhere to the wishes of the Palestinian Authority that they censor their own story about Palestinian police violence.
Compare the lack of response here to the huge headlines when Israel attacked an office tower that housed AP along with Hamas offices and intelligence equipment in May. Article after article hinted that Israel deliberately attacked the media, a most ridiculous accusation. But when Palestinians target media explicitly - silence.
That cowardice is the real story here, not the attack itself. A news organization that makes a decision to censor itself in the face of threats from Palestinian bullies cannot be trusted to objectively report any news from the region - Palestinian threats clearly work.
And they aren't only effective against Washington Post reporters. There must be a tacit agreement among mainstream media to keep this story quiet, because 24 hours after the FPA issued their press release, there are still no articles on this (that I could find in Google News.)
This is just a small example of how media bias works - at all psychological levels. The media does not fear retribution from Israel so it can be as critical and unfair as it wants. It fears a great deal what the PA and Hamas can do so it censors itself. That self-censorship results in more anti-Israel stories to justify their cowardice and make reporters act like they are fearless in the face of a regional superpower.
The deliberate choice by the entire international media to ignore a story of attacks on journalists betrays a deep rot in today's journalism.
Too bad that story won't be covered by journalists.
UPDATE: David Gerstman reminds me that a few years ago, Israeli police accidentally detained a Washington Post reporter for a brief time and it made a headline in the New York Times.
UPDATE 2: Sufian Taha was arrested with Booth in 2016 - the very same person, two arrests, only one newsworthy!