On this anniversary of the Six Day War, it is worth a reminder of what the original PLO Charter said about its goals. Articles 22-24:

Article 22. The people of Palestine believe in peaceful co-existence on the basis of legal existence, for there can be no co-existence with aggression, nor can there be peace with occupation and colonialism.
Article 23. In realizing the goals and principles of this Covenant the Palestine Liberation Organization carries out its complete role to liberate Palestine in accordance with the fundamental law of this Organization.
Article 24. This Organization does not exercise any regional sovereignty over the West Bank in the Hashemite Kingdom of Jordan, in the Gaza Strip or the Himmah area. Its activities will be on the national popular level in the liberational, organizational, political and financial fields.

Article 22 shows that the PLO considers all of Israel to be "occupied." And Article 24 shows that the PLO did not consider the West Bank or Gaza to be part of the Palestinian state that they said they wanted.
Here's a photo of a PLO meeting in Gaza before 1967, with a map of "Palestine" in the backdrop showing that they didn't consider the West Bank and Gaza to be the same as the part of Palestine they sought: 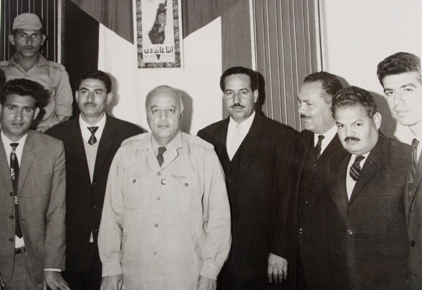 Only after the Six Day War did the PLO decide that the West Bank and Gaza were part of the Palestinian state they sought.
To summarize: The PLO only wants the parts of Palestine that are controlled by Jews.
(We've discussed many times that "historic Palestine" includes parts of Lebanon and Jordan which the PLO never claimed.)
Another interesting fact is that the Palestinian claim on Jerusalem started well after 1967!
The 1968 PLO Charter does not mention Jerusalem once.
Have you ever noticed that Palestinian officials love to put a photo of the Dome of the Rock as a backdrop in all their offices? Here's Mahmoud Abbas with Secretary of State Blinken last month. 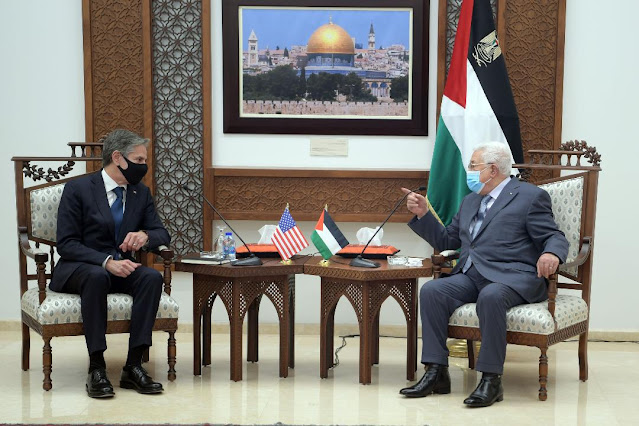 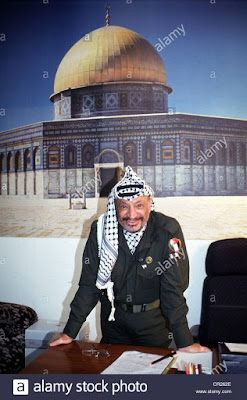 Palestinian claims on Jerusalem seem to have been carefully coordinated with other Arabs (for example, in an Arab meeting in 1982) but it seems that only after 1988 when Jordan renounced its claim to the West Bank did the PLO make Jerusalem a key demand.