The IDF (finally!) explains what Hamas was doing in the Al Jalaa (AP, Al Jazeera) building 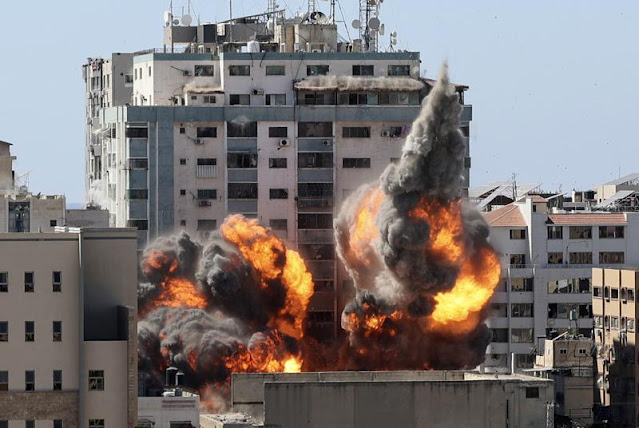 A press release from the IDF belatedly explains the reason that it destroyed the Al Jalaa building, which housed offices of AP and Al Jazeera:

During Operation "Guardians of the Walls" the IDF struck the al-Jalaa building on May 15th, 2021. The site was used by the Hamas terror organization for intelligence R&D and to carry out SIGINT (signals intelligence), ELINT (electronic signals intelligence), and EW (electronic warfare) operations, targeting both IDF operational activity and civilian systems in Israel.
One of the main goals of these efforts was to develop a system that would disrupt the Iron Dome aerial defense system.
The purpose of the IDF strike was to curtail these enemy capabilities, including destroying special equipment, and preventing their use during the operation. According to IDF assessments, the equipment was in the building at the time of the strike. The strike was designed to collapse the building in order to ensure the destruction of the special means.
The target was of high military value to Hamas and was vetted according to rigorous procedures within the IDF, and in accordance with international law.
In light of the nature of the target, prior to the strike, the IDF provided civilians in the building advance warning. Significant efforts were made to enable civilians to evacuate the building. The evacuation process was meticulous, and as a result, no civilians were harmed.
This event should be put into context - Hamas intentionally operates within the civilian population of Gaza and does so in order to hamper the IDF’s operational activity.
The IDF will continue to maintain the security of Israeli citizens, while doing its best to prevent any possible harm to non-combatants.

This is by any measure appropriate under international law. An electronic warfare site is as valuable as any command and control center.

The only possible objection would be if the IDF could have achieved the same aim by only shooting missiles into the floors of the building that housed these offices. It seems unlikely, since a lot of equipment was also on the roof, and if (as has been reported) Hamas controlled three lower floors of the building, then taking them out would have very possibly collapsed the entire building in a way that could have caused many casualties - if it toppled rather than imploded.

This operation does not violate the principle of distinction, since it is a military target. It does not violate the principle of proportionality, because all civilians were warned and not one was injured. THe value of Al Jazeera's and AP's equipment is hardly proportional in value to that of taking down a major Hamas electronic warfare site during wartime.

Ken Roth of Human Rights Watch has tweeted many times that there was no evidence of Hamas presence in the building, and even if they were there, that taking the entire building down was not proportionate.

No one has been able to verify the Israeli military's claim that Hamas was inside the building housing AP and Al Jazeera. (AP denies it.) Even if it was, how does the definite military advantage of the attack justify the enormous civilian (media) cost? https://t.co/zXrGnyMm7R pic.twitter.com/LpUA9pkhlv

Refuting Israel's claim: "AP’s bureau has been in this building for 15 years. We have had no indication Hamas was in the building....This is something we actively check to the best of our ability. We would never knowingly put our journalists at risk." https://t.co/bfjrpz2la0 pic.twitter.com/bO5lXrYNXm

The 12-story building in Gaza that an Israeli airstrike destroyed not only housed major media organizations but also offered a "vantage point for the world" as @AP cameras on the roof captured Israeli bombardments and Palestinian militants’ rocket attacks. https://t.co/7Xvg9G6VV1 pic.twitter.com/2Ur1lDNO7h

So either you believe the IDF, which has great disincentive to attack civilian targets, or you believe a "human rights" leader who has demonstrated his hate for the Jewish state and his bias over the years, and who wants to imply that Israel is somehow trying to stop negative news coverage - by attacking news organizations.
The IDF should have released this statement the same day as the attack. I had read weeks ago that Hamas was using the building to try to scramble Iron Dome defenses, so clearly that had leaked. There was very little advantage to waiting this long.
But it does show that in retrospect, the IDF is nearly always correct and its critics are dead wrong.