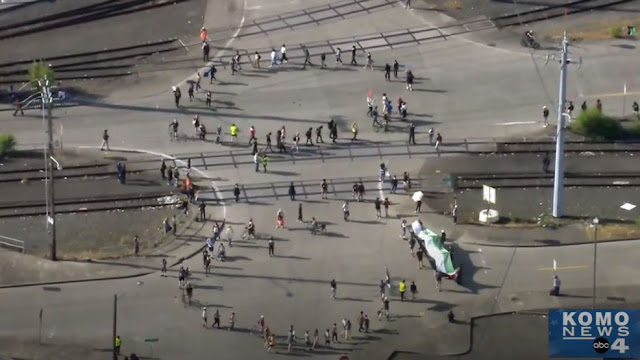 For the past two weeks, anti-Israel protesters have been trying to stop Israeli shipping company Zim from unloading cargo in North America.
In Seattle, the protests have been organized by Falastiniyat, which describes itself as "a grassroots collective of diasporic Palestinian feminists in Seattle living & organizing at the intersection of gender justice and anti-colonialism."
A quick glance through their Instagram page shows that these so-called feminists have not once protested against Palestinian laws that are specifically against women. This shows that these "progressive" groups are hypocrites, with no interest in actually helping Palestinian women and whose obsession with Israel - the most liberal state in the region - is thinly veiled Jew-hatred.
Aisha Mansour from Falastiniyat, said, "we’re just trying to tell our ports, stop taking anything from Israel.”
But the Zim ship wasn't unloading anything from Israel. In fact, the shipment that these bigots have been so keen to block includes medical and personal protective equipment that it picked up from South Korea and China last month.
And while Zim was founded and has headquarters in Israel, it is a public company.
Beyond that, the Zim San Diego ship that is docked at Seattle is sailing under the Liberian flag. None of the workers on the ship are Israeli. The recipients of the cargo aren't Israeli.
When international shipping is disrupted, it hurts a lot of people, including the dockworkers, as well as the other shipping companies whose own shipments are delayed by these protests, and their own customers.
The bigots who claim, incredibly, that they are pro-Palestinian don't care about all the people that they hurt. As long as some Israelis are losing money, then it is all worthwhile to them to hurt hundreds or thousands of other people whose livelihoods and jobs depend on international commerce.
That is what hate looks like. This hate has nothing to do with Palestinian solidarity - it is aimed at Jews in Israel.
After a standoff of over a week, police arrested 10 protesters and the cargo is now being unloaded safely.
The Northwest Seaport Alliance issued this statement, pointing out that freedom of expression is not the same thing as disrupting people's livelihoods:

The Northwest Seaport Alliance respects the expression of first amendment rights and prioritizes the safety of both workers at our properties and those exercising their free speech rights.
The NWSA is the fourth-largest international seaport in the United States and keeping lanes of commerce open to international trade is essential to our region and country.
The ZIM San Diego is part of a regular service that calls Terminal 18, carrying routine import cargo from Asia, including medical and PPE equipment and picking up export cargo from our Washington exporters. Local retailers and businesses across the Midwest rely on the import cargo delivered by vessels to our terminals.
Port of Seattle Police and Seattle Police Department have worked to provide a safe zone for protestors to ensure individual expression is protected while maintaining access to Terminal 18 to allow scheduled operations to continue.
Law enforcement provided multiple warnings to individuals obstructing the right of way and made approximately ten arrests of individuals who refused to comply and continued to obstruct roadways.  We continue to monitor the situation as port operations return to normal.
The NWSA remains committed to close coordination with all stakeholders to ensure a safe environment for all.