Jewish tokens/currency in Ottoman-era Palestine were used by all

The special conditions under which Jews lived in the Diaspora before Emancipation and in Ereẓ Israel especially up to World War i led to a kind of community similar to a miniature state. To preserve the character of the community, whose members did not enjoy the privileges of other citizens, Jews were obliged to create and provide for their own institutions, such as synagogues, rabbinic courts, schools, hospitals, homes for the aged, soup kitchens for the poor, etc. All these institutions were administered by the community and financed by its members through ordinary and extraordinary contributions. In order to cope with these tasks, the communal leaders at times resorted to issuing tokens of their own, with an internal value only and not generally acceptable outside the community. To not raise the suspicion of the authorities, they were often cast in a style that distinguished them from legal tender. Many communities issued tokens in metal or paper, and much information about them has been lost.
Under Turkish rule in the 19th and 20th centuries, the communities in Ereẓ Israel issued a considerable number of tokens. A brass Ẓedakah token was issued in Jerusalem by the Torat Ḥayyim yeshivah, which also put out a small stamp-shaped paper token of ½ para and different kinds of paper currency in denominations of 1, 5, and 10 gold Napoleons. Other communities in Jerusalem, such as the various kolelim, also issued their own paper currency, as did Hebron yeshivah (in Jerusalem) during the British Mandate. There were other brass tokens, such as a square one bearing the legend שְׂכַר שְׁחִיטָה דַקָּה ("fee for the 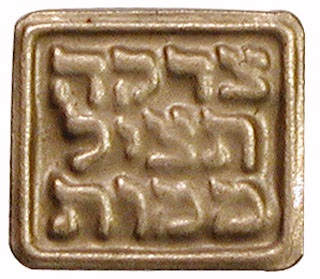 slaughter of a sheep or goat"), a rectangular one inscribed צְדָקָה תַּצִּיל מִמָּוֶת ("charity saves from death"), a round one with the legend קרש ("grush" = piaster = 40 para), and another round one with the abbreviation צְדָקָה לַעֲנִיִּים) צל״ע "charity for the poor"). Turkish copper coins were also issued, countermarked with the same abbreviation. In the 1880s the colony of Zikhron Ya'akov and the agricultural school of Mikveh Israel issued brass tokens of 1, ½, and ¼ (presumably piaster), which, however, were declared illegal by the Turkish authorities. Another more primitive brass token was issued by the colony of Reḥovot, which also issued paper tokens inscribed in Hebrew and French in denominations of ½, 1, 3, 6, 13, and 26 piasters. ...To overcome the lack of currency from 1914 to 1916, the Anglo-Palestine Co., the forerunner of the Anglo-Palestine Bank and today's Bank Leumi, issued checks in denominations of 5, 10, 20, 50 and 100 francs which were accepted by the yishuv as legal tender.

Jews had been doing this for centuries in their communities, and it is a fascinating topic. But it appears that at least some of these tokens became accepted currency in Ottoman Palestine even for non-Jews!
According to a November 1889 report in the Deseret News: