How many Gazans were killed by terrorist rockets? A lot more than are being reported

The Palestinian Centre for Human Rights reported this little girl being killed on May 14:

At approximately 21:30, shrapnel of a missile fell on a house belonging to the sons of ‘Issa ‘Obaid on al-Nozhah Street in Jabalia. As a result, a girl with disability namely Buthaina Mahmoud ‘Issa ‘Obaid (6) was killed after being hit with shrapnel in the right side of her head when she was in front of her house.

PCHR doesn't mention where the actual "missile" hit, only that 'Obaid was killed by shrapnel from it. This seems to indicate that she was not killed by an Israeli airstrike but from a terrorist rocket that fell short.
It is difficult to estimate how many Palestinians were killed by terror rockets. We know that Iron Dome intercepted over 1400 rockets that were aimed at populated areas and that it had at least a 90% success rate.  The IDF says that 60-70 rockets managed to get through Iron Dome to populated areas, killing 12 people.
At the same time, the IDF says that 680 rockets fell short in Gaza - ten times the number that landed in Israel's populated areas.  If we assume that Gaza's population density is roughly the same as that of Israeli areas where the 60-70 rockets fell, and that the rockets that landed were equally deadly in both places, then we can guess that over 100 Gazans were killed by rockets!
However, the number is almost certainly lower than that. This map released by the IDF showed that while nearly all terror rockets were launched from populated areas, many of them landed in the farmlands that are on the borders of Gaza. 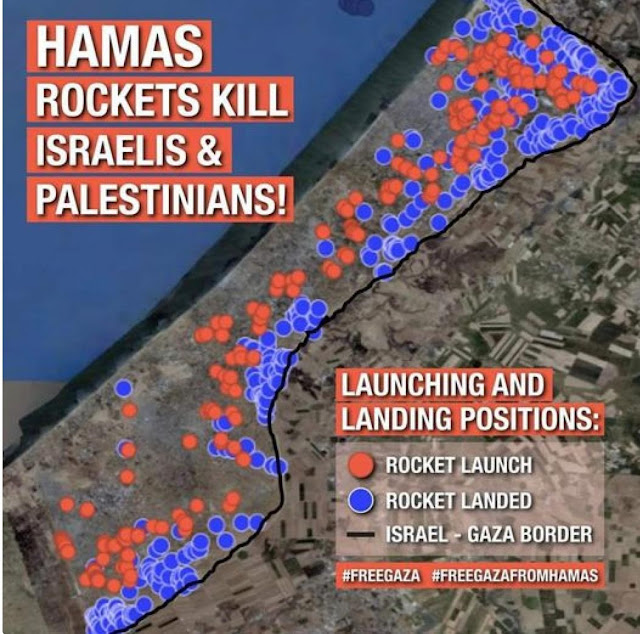 Many - but not all.
Jabalia, where Buthaina ‘Obaid was killed - along with Beit Lahiya, Beit Hanoun and Sheikh Zayed, all in the north of Gaza - were heavily hit by rockets from terror groups. So were other towns and villages like Khuza'a in the south.
So these two strikes in Beit Lahiya on that same day that 'Obaid was killed were very possibly the result of terror rockets falling short:

According to PCHR’s investigations, Israeli warplanes targeted an agricultural land near a 3-storey house belonging to Mahmoud Hashem al-‘Attar’s sons in Beit Lahia on the Street beyween al-‘Atatrah and al-Salatin neighborhoods in Beit Lahia. As a result, Lamyaa’ Hasan al-‘Attar (27) and her 3 children namely Islam (8), Amira (7), and Mohammed “Zain al-Dein” (8 months) were killed, and their house was completely destroyed. Meanwhile, Israeli warplanes launched 2 missiles at an agricultural land in al-Amal neighborhood in Beit Lahia near a 2-storey house belonging to Ibrahim Mousa Ahmed Salama (49). As a result, his wife, Faiza Ahmed Mohammed Salama (45) was killed, and the house owner and his son were injured.

There are plenty of populated areas marked at blue on the map where deaths and injuries seem far more likely to have come from terrorist group rockets than from Israeli fire. Here's one:

At approximately 16:20 on Wednesday, 12 May 2021, the dead body of Hammad ‘Ayyad Mansour al-Debari (86), from al-Shokah in eastern Rafah, arrived at Abu Yousif al-Najjar Hospital after he sustained shrapnel wounds in the head inside his house near al-Sabereen Mosque.  PCHR’s staff is still investigating the circumstances of the incident, which coincided with the Israeli Iron Dome’s interception of the Palestinian rockets fired from the Gaza Strip along with Israeli artillery shelling.

No one is investigating these strikes, of course. But 680 rockets landed somewhere, and we know they - killed people - and some of them killed many as we know from the first day. They are bigger than the rockets of the past. Israel knows its targets, and it is absurd to think that Israel is targeting random houses with children when we know that the IDF calls residents before attacking rocket launch sites or Hamas command and control centers.
It is not a stretch to believe that a high percentage of the civilians killed in Gaza were killed by those 680 rockets that rained on them.
(h/t Nevet)