200 journalists on the record supporting lying about Israel. Why are they still employed? 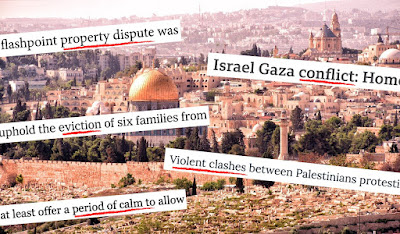 A group of 200 journalists - including reporters for the Washington Post and Los Angeles Times - signed a letter demanding that news organizations be even more anti-Israel than they are.
The letter is almost outlandish in the number of lies and reckless disregard for facts:

Finding truth and holding the powerful to account are core principles of journalism.
Yet for decades, our news industry has abandoned those values in coverage of Israel and Palestine. We have failed our audiences with a narrative that obscures the most fundamental aspects of the story: Israel’s military occupation and its system of apartheid.

For the sake of our readers and viewers — and the truth — we have a duty to change course immediately and end this decades-long journalistic malpractice.

According to these people who supposedly care so much about "finding truth," Israel is guilty of apartheid - and anyone who disagrees is a Zionist fanatic.
An Arab party is about to be part of the latest government. An Arab has been acting president of Israel. But counterexamples that disprove apartheid are not the "facts" that these jokers want to talk about. No, when they say "apartheid," they mean that they will twist the facts they can to support that position and ignore anything that contradicts it.
The exact opposite of what journalists are supposed to do.
This letter is a perfect example of the "journalistic malpractice" that they pretend they are opposed to.

Take, for example, the language used in the recent coverage of East Jerusalem neighborhood Sheikh Jarrah. Media outlets often refer to forced displacement of Palestinians living there — illegal under international law and potentially a war crime — as “evictions.”
This term misleadingly implies a real estate “dispute” between tenant and landlord, an inaccurate depiction of the state of affairs. The United Nations considers East Jerusalem occupied Palestinian territory, meaning Israel’s territorial claims there are not recognized.

Let's pretend that part of Jerusalem is occupied. Does that mean that the legal owners of a property cannot demand rent? These so-called journalists pretend that the Sheikh Jarrah events are Israel trying to evict Arabs from their homes, but the government of Israel has nothing to do with it. It really is a real estate dispute - one where one side has shown, over decades, that it is the legitimate owner of the land, and the other side has failed to do so.

That's the truth that these journalists want to hide from you.

During the last few days of Ramadan, Israeli forces violently attacked worshippers at the Al Aqsa mosque compound with tear gas and rubber-tipped bullets. Journalists didn’t call this an “attack” or “assault” on Palestinians, but rather a “clash,” as if both sides shared equal culpability and agency in the escalation.

Wikipedia, linking to Haaretz and wire services, summarizes the events this way:

On 7 May, large numbers of police were deployed on the Temple Mount as around 70,000 worshippers attended the final Friday prayers of Ramadan at al-Aqsa. After the evening prayers, some Palestinian worshippers began throwing previously stockpiled rocks and other objects at Israeli police officers. Police officers fired stun grenades into the mosque compound.

The journalists who claim that they want to report the truth are lying.

When Israel attacked Gaza, media outlets framed it as a “conflict” between two equal entities, ignoring the total asymmetry in power. Under the guise of objectivity, rockets fired at Israel — which caused significantly less damage than Israeli airstrikes — were covered just as much as Israel attacking medical facilities and leveling entire residential buildings, clouding the nearly one-sided scale of violence and destruction.

So 4,300 rockets aren't news? Millions of Israelis being forced into shelters isn't news? Here we have journalists not only saying that there should have been more coverage of Gaza - and there was - but that there should have been less coverage of Israeli suffering!
Also, there is the small fact that these journalists want to hide: Hamas started the war. They gave advanced notice that they intend to shoot rockets to Jerusalem and then they did it. To suggest that this news shouldn't be covered is the real journalistic malpractice.

The human toll caused by Israel’s bombardment is indisputable: Hundreds dead, more than 65 of them children. While statements made by Israeli officials and their defenders justifying the killing of civilians went unchallenged, Palestinian civilians had their humanity interrogated: Journalists asked whether they support violence or Hamas rockets.

Hamas' health ministry claims, and claims from Gaza NGOs saying that people killed were civilians or were killed by Israeli missiles when they were killed by Hamas rockets, went unchallenged.  But these journalists support that.
The hyperlinked example given of Palestinians "having their humanity interrogated" is worth looking at. Richard Engel gives two Gaza girls the chance to say what they want, unchallenged, and they do indeed support the rockets, and are able to say exactly why. This interview is as pro-Gaza as can be.

Young women in Gaza tell me how it feels to live in an open air prison, that they too want to live in peace, and see the rockets as “self defence.” pic.twitter.com/SLHvkcTVx3

Troubling still, reporting wanes considerably when Israel halts its airstrikes. Palestinians are ignored in so-called times of “peace” despite attacks and other hostile aspects of life under occupation continuing after the ceasefire.

That is completely false. The Richard Engel piece was done on May 25, days after the ceasefire. Western reporters who could not enter Gaza during the fighting streamed in as soon as they could afterwards and submitted hundreds of articles since then.

As journalists, we are entrusted with a profoundly important mission in a free and democratic society, the power to inform the people and guide the national conversation, from the family dinner table to Capitol Hill.
We are calling on journalists to tell the full, contextualized truth without fear or favor, to recognize that obfuscating Israel’s oppression of Palestinians fails this industry’s own objectivity standards.
We have an obligation — a sacred one — to get the story right. Every time we fail to report the truth, we fail our audiences, our purpose and, ultimately, the Palestinian people.

What exactly is a journalist's job - to tell the truth objectively, which is something that these people clearly oppose, or to "guide the national conversation" and support the Palestinian people? The two contradict each other, and from this letter, it is obvious which of these two competing values are considered more important.
And this letter should be enough to tell every fair media outlet that those who signed it have absolutely no ability to be objective, and they look at journalism as a crusade and a propaganda mission.
Why would any news organization want to employ people who knowingly lie, and who openly advocate reporting lies?