Turkey's anti-Israel Anadolu Agency gives a summary of the background behind the headlines in Sheikh Jarrah:

In 1956, the 28 refugee families who lost their homes during the Nakba reached an agreement with the Jordanian Ministry of Construction and Development and the UN refugee agency UNRWA to provide housing for them in Sheikh Jarrah neighborhood.
At that time, the West Bank was under Jordanian rule (1951-1967).
According to the Civic Coalition for Palestinian Rights in Jerusalem (CCPRJ), the Jordanian government provided the land while UNRWA covered the cost for constructing 28 homes for these families.
“A contract was concluded between the Ministry of Construction and Reconstruction and Palestinian families in 1956, with one of the main conditions stating that the residents pay a symbolic fee, provided that ownership is transferred to the residents after three years from the completion of construction,” the CCPRJ said in a statement.
This, however, was interrupted by the Israeli occupation of the West Bank, including Jerusalem, in 1967 which prevented the registration of the houses under the names of families, the statement said.

There are two important facts that need to be verified: Did Jordan actually promise to give these houses to these families, and who owned the land?
UNRWA's annual reports that mention this issue do not verify anything about the first assertion. Its 1954 report says:

Because of the housing shortage in most Jordanian towns shelter represents a heavy cost element in the budget of refugees who wish to become self-supporting. The provision of low-cost housing is therefore an urgent necessity. In addition to the Amman housing scheme, involving fifty houses for 253 ration recipient refugees, completed in 1952, UNRWA is now planning new low-cost urban housing for a total of 200 families in Amman, Jerusalem, Hebron and Aqaba. Refugees who will occupy the houses are those who are already partially self-supporting and who, with low rents, will become entirely self-supporting and thus removable from ration rolls. Designs are being drawn and negotiations are under way with the Government of Jordan for the selection of suitable sites. The houses will be financed by UNRWA, with the refugees paying nominal rents; the land will be obtained by the Government.

The intent was that the families would pay low rent, which definitely means that they would not own the houses.
This seemed to change slightly over the years from low-rent to no-rent, but there was no indication that the residents would own the housing. From the 1955 report:

Building work at the second, at Sheikh Jarrah, near Jerusalem, has also been started. Housing for 28 families will be built at a cost of $55,636 made available by the Agency to the Government under an agreement signed on 16 November 1954.

At the Sheikh Jarrah quarter, near Jerusalem, the twenty-eight housing units were completed and the selection of families is being finalized.

Jordan had seized Jewish-owned lands after the War for Independence. As summarized by the PLO in one of the "Palestine Papers" memos that freely admitted Jews owned large amounts of land in Judea and Samaria:

In August 1950, the Jordanian General Administrative Governor of the West Bank issued A Proclamation Aiming to Prevent the Crossing of Borders between the Arab Areas and Jewish Areas in Palestine, and Prohibition of Trading and Dealing with the Enemy No. (55) of 1950. This Proclamation provided that residents of the State of Israel (including its Arab citizens) would be considered enemies in relation to the laws regarding trading with the enemy. Relying on the Trading with the Enemy Ordinance, 1939 and on the Proclamation, the Jordanian Minister of Interior appointed the Custodian of Enemy Property and vested in him, through a multitude of specific and general vesting orders, the property of Israelis in the West Bank.
The Custodian held and administered Jewish-owned in the West Bank until 1967 according to the Trading with the Enemy Ordinance (as opposed to administering the land like absentee property according to the powers and rules of IHL). Some of these assets were used by the Custodian for public purposes, such as the establishment of refugee camps, the rehabilitation of refugees, and the setting up of army camps and marketplaces. In other cases, the property was leased to private individuals, who used the land for agricultural, commercial or residential purposes, depending on its characteristics.

Note that the PLO admits that Jordan did not treat Jewish-owned property according to international humanitarian law (IHL.) Even the PLO admits that Jordan took land illegally from Jews.
Nowhere is there any indication that Jordan sold these lands, though - as this memo shows, the land was leased to others. That must include UNRWA, which in the early 1950s was still considered to be a temporary agency - Jordan wouldn't willingly give away land to UNRWA permanently. And when Jordan allowed private individuals to use the land, it was leased, not sold.
There is no way Jordan would have agreed to give this land to the Palestinian residents of Sheikh Jarrah.
Although I can only see snippets from this publication, a Jewish Agency digest from around 1950 showed that the Jordanian Ministry of Construction and Reconstruction definitely allocated Jewish-owned properties to UNRWA, but didn't sell it: 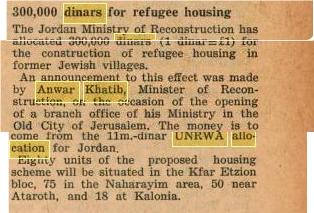 It was quite well known at the time that the properties that Jordan gave to UNRWA were often those that were owned by Jews. There is absolutely no reason to think that the lands that Arabs now claim ownership for in Sheikh Jarrah were originally owned by Arabs - if so, they would have protested Jordan's takeover of those lands back in the 1950s and UNRWA's building on them.
While this evidence is fragmentary, it all points to the conclusion that the land in Sheikh Jarrah was originally owned by Jews, taken by Jordan, and lent or leased to UNRWA - but never given or sold to private individuals.