When Will it End? When They Pave Gaza and They Put Up A Parking Lot (Judean Rose) 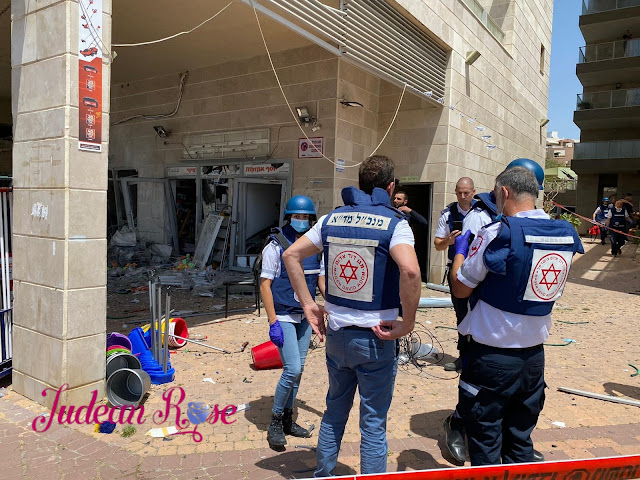 As news came that two women in Ashkelon had been murdered as a result of direct hits to their homes, my son wrote the following on our family Whatsapp group in the Hebrish shorthand typical of my 12 EFL children: “A jeep full of an Arab family just drove by the bus stop blaring their horn, fingers in v shape out the window.”

While my son was writing this to me, a friend in Ashkelon was sharing phone footage and voice recordings from a female friend, describing the devastation surrounding her. Two 20-story buildings on either side of her building had taken direct hits. Every window of every car, up and down her street, had been shattered from the impact of the twin blasts. The footage she recorded with her phone showed a man down on the ground, shaking uncontrollably, with obliterated buildings and the rubble of what was once a hardware store, surrounding him.*

As my friend was sharing these items with me, he was debating whether or not to travel to a suburb of Jerusalem for a bar mitzvah. The decision was made for him almost immediately when the residents of Ashkelon received a notice from the mayor of that town, telling people to stay home. My friend gave up on traveling to the bar mitzvah, but thought he’d go to the mom and pop grocery store to pick up some fruit and vegetables. Just then, the sirens began to wail once more. And then more sirens.

Some of us become inured. We figure whatever happens, happens. So after a few minutes of mulling it over, my friend wrote, “If I'm not back in half an hour, you can have the scoop.”

What could I do but laugh at that, and yes, gallows humor is a necessary coping mechanism. And also, for some of us, it remains a bit surreal until such time as it becomes all too real, and perhaps a person won’t survive to know that, God forbid. But yeah, if a missile has one’s name on it, God forbid, there isn’t much you can do.

My friend, in fact, moved from Jerusalem to Ashkelon during one of the heavier barrages of missiles not too many years ago. He wanted to be with our people in the periphery, who suffer the most from our “cousins” in Gaza. This was a way he could contribute, just by being there, one of them, strengthening our Jewish presence in that part of the country. I admire that, and I wish others would emulate him.

But here I am in Gush Etzion, another important part of our country, a place that deserves to be strengthened with a greater Jewish presence. Even at this distance, I heard the booms when the missiles hit Jerusalem and its environs, some ten miles away from us. Had I not heard those booms, it would not matter. The attacks affect us all in many ways, no matter where in Israel we live. Whatsapp is a lifeline for our family, and every morning and evening, we are checking on our children in the south, our children in Jerusalem. We worry. We worry what will happen. We are all, to one degree or another, hyper-vigilant.

And so I wonder, and wonder some more, each time this happens: What is the solution?

We cannot turn the clock back to before Ariel Sharon did the unthinkable and expelled thousands of Jews from their homes, though he promised not to, though we the people, voted against the move. Ariel Sharon empowered the Arabs, and now they cannot be deterred, short of turning Gaza into a parking lot. And if we were to do so, the fallout on world Jewry could potentially be very bad, at this time of burgeoning antisemitism.

Meantime, the world is not on our side.

What is the solution? Do we do it anyway? Would our government have the chops to order it done?

My friend, the one in Ashkelon, suggested we bomb the fancy malls, restaurants, and shopping centers in Gaza, so the before and after photos get shared in the media, so that at last the world can see that Gaza is NOT, contrary to popular world belief, a concentration camp. But it wouldn’t matter. It wouldn’t matter. They will show the dead Arab children, the dead Arab pregnant women, and not our own. They will present the facts in the wrong order: “Israel Bombs Gaza in Retaliation for Rocket Attacks,” and not “Gaza Shoots Missiles into Israel, Israel Retaliates.”

They hate us. They hate us because we are Jews. They back the people who are murdering us, who send colorful balloons with attached incendiary devices to tempt our children so that they might be blown to smithereens. Our children are not children to them, but vermin. Because our children are Jewish. And that makes us subhuman to them. And so our murderers, those who rise up to kill us in every generation and at every chance they get, are lionized by the world.

They are apparently sorry that Hitler, yemach shmo, did not finish the job. Biden shows it when he restores funding to UNRWA and the PA and even tops it up some more by the millions. He shows it when he begs Iran—desperately—to let him give them more money so that the mullahs can obliterate us with the weapons they will build with America’s help. And American Jews voted for this--they voted for these things when they overwhelmingly voted for Biden.

As I write this, the IDF has coined a new name for the newest in a long line of operations meant only to stop the rockets until the next time. Because everyone knows they can’t be stopped for good unless we take the ultimate step of obliterating Gaza. That new name is Operation Guardian of the Walls, a clear reference to the walls that surround the Old City of Jerusalem, the supposed center of our current conflagration. In a nutshell, Arab tenants refused to pay rent to their Jewish landlords, and after many years of hashing it out in court, they’re being evicted.

In the last 24 hours, Hamas and Islamic Jihad have launched continuous attacks on Israel from Gaza.

The IDF is operating in response to these attacks by striking terror targets and operatives in Gaza.

This is Operation Guardian of the Walls. pic.twitter.com/sa9UwYfIcV

It’s how it is everywhere. You don’t pay rent, you get booted out. Nowhere else in the world would you have world condemnation for the lawful, rightful eviction of BUMS who refuse to pay the rent.

By the time this goes into print, a lot will have happened. But it is all fairly predictable. The Israeli government will retaliate because now they have to, because Israeli citizens have been killed. But the actions we take will fall way short of solving the problem. Because everyone knows we won’t turn Gaza into a parking lot. And the ones who are most keenly aware of this are the Arabs themselves—the ones shooting missiles into Jerusalem, those sending balloons to burn our crops and hurt our children, the ones cheering and flashing the victory sign in broad daylight on major Jerusalem thoroughfares to ordinary Jewish Israelis waiting to take the bus home after a long day of work.

We wait for God.

*Note that I did not share these privately shared phone items here. If it’s not approved by government censors, I don’t share it, because “Loose lips sink ships.” No desire to help the enemy improve its aim. (The clips I did share here have been cleared for publication.)