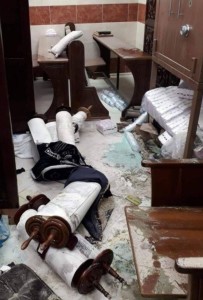 Lod, May 13 - Law enforcement authorities in Israel sought to assuage the fears of Jewish residents in this mixed town on the country's coastal plain that the riots, synagogue-burning and desecration, looting, attempted lynchings, and other violence aimed at them by the town's Arab residents stems not from animus toward them as people of Hebraic heritage, but from opposition to Jewish sovereignty in the land.

Police Commissioner Kobi Shabtai told representatives of Lod's Jewish community today they need not worry that the constant attacks on them by their Arab neighbors in the streets over the last several days are antisemitic in nature, because the pogrom is actually just anti-Zionist.

"To those who are concerned about antisemitic attacks in Lod, I am here to reassure you there is none of that," declared Shabtai at a press conference he convened at the site of a burned-out synagogue. "All the unrest you have experienced this week is merely anti-Zionist, and you may therefore unburden yourselves of the anxiety over antisemitism."

Minister of Public Security Amir Ohana stressed the importance of restraint under the circumstances. "I acknowledge the temptation to form groups to protect yourselves against antisemitic marauders," he stated. "But these are not antisemitic marauders. They only don't want us as Jews to control our own land and not be under the boot of Islam. Do not be confused by Arabic cries of 'Itbah al Yahud,' 'Slaughter the Jews.' Anyone who attempts vigilantism or revenge will be arrested and prosecuted to the fullest extent of the law." He declined to confirm whether the Arab perpetrators of the violence will face such a fate.

Border Guards units, a paramilitary division of the police, spread throughout the mostly-Jewish sections of the town yesterday and today to keep the peace, which they implemented by leaving Arab rioters alone to continue attempting to lynch and stone Jews, while arresting Jews who attempted to defend themselves. "It's a complicated situation," said a sergeant. "On one hand it's our duty to protect our citizens, but on the other, this is a tough moral call: do we protect everyone, or just the ones the progressive media support? We've been through several briefings the last couple of says drilling into us the difference between antisemitic attacks and anti-Zionist attacks, and I'm pretty sure the men have got it down."

The sergeant indicated he had more to say, but had to dodge several rocks hurled by Arab residents as he went to arrest a Jew brandishing a tire iron at a group of knife-wielding Arab thugs approaching him.