We last saw Salon writer Doug Neiss with a thoroughly insane and truly antisemitic article that justified comparing Israel to Nazi Germany, insisting that the similarities are so strong that one cannot consider the comparison antisemitic.
Now Neiss has another, equally crazy article. Fisking this idiot is too easy, but this one section astonished even me - not that the moron wrote it, but that Salon editors thought it was reasonable enough to publish:

Venerable White House reporter Helen Thomas was forced to retire — and died not long after — for letting her sympathy for the Palestinian cause get the better of her discretion. That would never happen to a Jewish reporter for a comparable pro-Israel lapse — for suggesting, say, that Palestinians should simply resettle elsewhere and give up their doomed claim to any piece of Palestine, because no one's eyebrows would be raised. Jewish reporters advocate for Israel all the time. They themselves may be unaware of the extent of their bias. 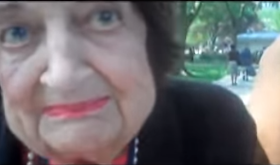 Helen Thomas was forced to retire from UPI after she said in 2010 that Jews in Israel should "get the hell out of Palestine" and "go back" to Poland and Germany - the sites of their genocide.
She doubled down on her antisemitism, telling an Arab audience "Congress, the White House, Hollywood and Wall Street are owned by Zionists. No question, in my opinion." and later saying in a thoroughly antisemitic Playboy interview the following year that "Everybody is in the pocket of the Israeli lobbies, which are funded by wealthy supporters, including those from Hollywood. Same thing with the financial markets. There’s total control."
This classic Elder of Zion-style antisemitism is what Neiss calls "sympathy for the Palestinian cause."
After that, Thomas got another newspaper job. She died three full years after her leaving Hearst Newspapers, weeks short of her 93rd birthday.
The implication that she died a broken woman because of Jews forcing her out of her job for no reason is beyond what I ever expected to see in mainstream media.
Of course, this was followed by an assertion that Jewish reporters cannot help themselves but to be hopelessly, helplessly Zionist. (Except for the righteous Neiss himself!)
And a reiteration that Israel is Nazi Germany, reincarnated.

But, this is what we can now expect from Salon.
(h/t Tomer Ilan)