No, the State Department 2020 human rights report does not refer to "occupied territories" (UPDATE)

In a partial return to a pre-Trump-era norm, the US State Department’s annual report on human rights violations around the world published on Tuesday referred to the West Bank, Gaza Strip, East Jerusalem and the Golan Heights as territories “occupied” by Israel.

This is highly misleading.
In the Obama era, the very title of the annual report, as well as the contents of the report, referred to all the territories as "occupied territories" as their official name: 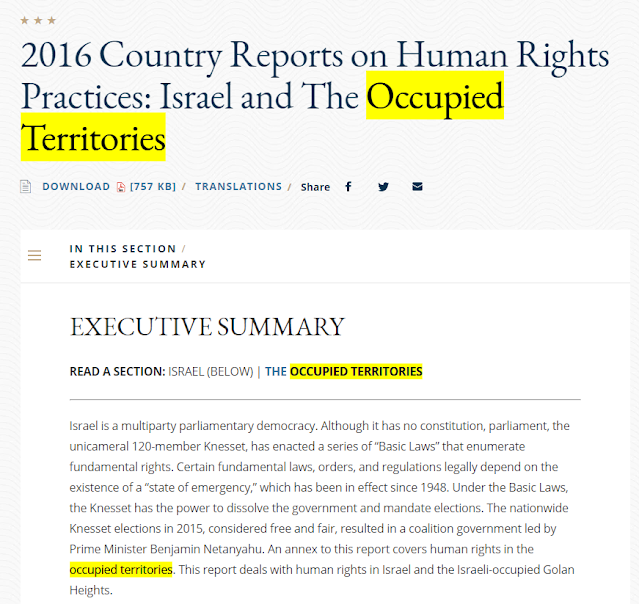 Under Trump, "occupied territories" was replaced with "West Bank and Gaza": 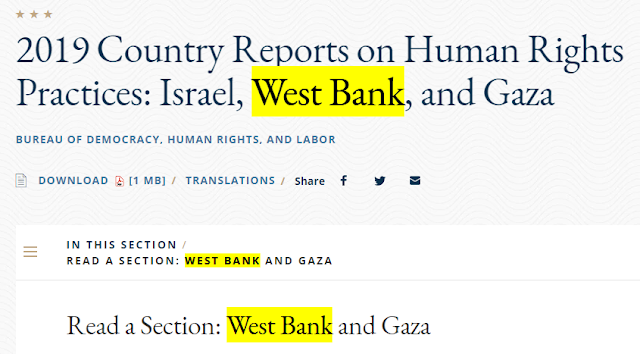 Now, under Biden, the territories are still referred to as West Bank and Gaza: 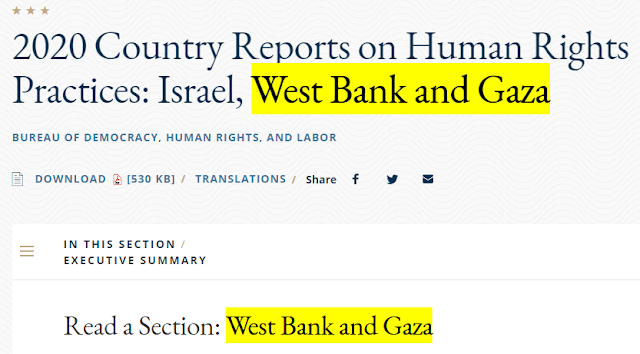 The only difference is that the 2020 edition says, in the West Bank and Gaza section, only once, that the territories were occupied in 1967: not that they are considered occupied today, as the Obama reports said repeatedly.

This section of the report covers the West Bank, Gaza, and East Jerusalem territories that Israel occupied during the June 1967 war. In 2017 the United States recognized Jerusalem as the capital of Israel. Language in this report is not meant to convey a position on any final status issues to be negotiated between the parties to the conflict, including the specific boundaries of Israeli sovereignty in Jerusalem, or the borders between Israel and any future Palestinian state.

Saying that Israel occupied the territories during a war - which it did - is not at all the same as saying that these are "occupied territories" today, and the report avoids using that phrase completely, except in quotes from NGOs.
During the press conference announcing the report, Acting Assistant Secretary of the State Department’s Bureau of Democracy, Human Rights, and Labor Lisa Peterson was asked about this specifically:

QUESTION:  I want to know, do you guys believe that the West Bank is occupied by Israel or not?
AMBASSADOR PETERSON:  So we have presented the section as we have stated in previous years.  This Human Rights Report refers to the commonly used geographic names of the area the report covers.  So Israel, West Bank, and Gaza.  This is intended to delineate geographic areas and puts them in alignment with – puts these reports in alignment with the rest of the report.

In other words, it is biased to refer to a geographic area with a contested political term, especially when no other region in the world is referred to that way.
This doesn't mean that the US does not consider the territories to be occupied, or partially occupied. That question has not been answered by the Biden administration, as far as I can tell. But it does mean that the US is no longer using the Obama-era and the UN formulation of automatically referring to them as occupied territories, which is clearly false in the case of Gaza or Area A by any sane definition of "occupied."
This is a very good thing. It shows that the Biden administration is not reflexively accepting the Palestinian position that they are living under "occupation" as the UN and Europe do, and as Obama did.
UPDATE: In a State Department briefing, the spokesperson did say explicitly that the United States considers the West Bank to be occupied today:

It is a historical fact that Israel occupied the West Bank, Gaza, and the Golan Heights after the 1967 war. That’s precisely why the 2020 Human Rights Report uses that term in the current context of the West Bank. It has been the longstanding position of previous administrations of both parties over the course of many decades. Do we think that the West Bank is occupied? Yes.

So it seems that the Biden administration position is that the West Bank is occupied - but neither Gaza nor the Golan Heights is.
Elder of Ziyon at Thursday, April 01, 2021
‹
›
Home
View web version