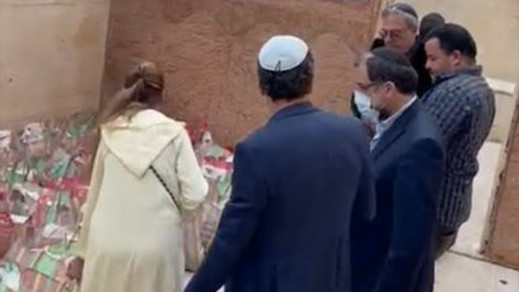 A video is being shared showing members of a Jewish organization giving out food packages at a synagogue to a long line of destitute Moroccans for Ramadan, under police supervision.
Most of the comments in YouTube are quite negative. While a smattering praise the Jews, most of the commenters say that they are ashamed that these people are taking charity from Jews and that the people accepting the aid are filled with shame and humiliation.

Oh God, hunger and humiliation 😂😂😂
The culture of humiliation and begging of foreigners is entrenched among groups in society.
The deadly person has made his people a prey for the people of Zion
There is an old Algerian proverb that says: Shame is longer than life Lives perish, but shame is passed on to generations 🤮🤮🤮
My Algerian brothers, as Muslims, we must send planes packed with Ramadan stands to our free Muslims fasting brothers in Morocco. So that Allah's enemies would not humiliate them.

The themes of the critics are that Jews are not true Moroccans, and that their intent in handing out food is to shame and humiliate Muslims.
It is interesting that accepting charity from Jews is utterly humiliating but accepting aid from UNRWA or the EU is not at all problematic for people who are supposedly so sensitive to shame.