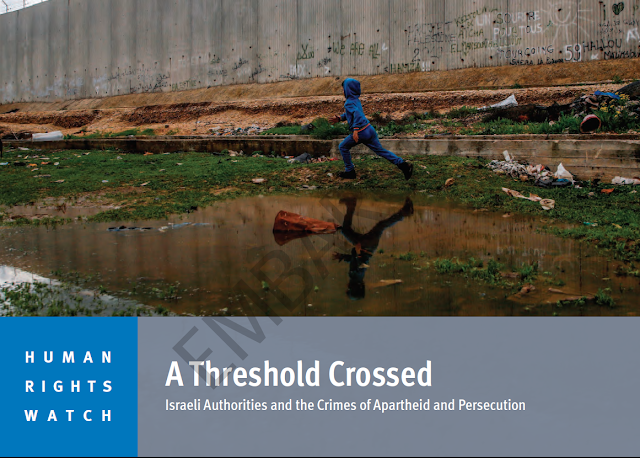 Human Rights Watch is releasing a new report on Tuesday that is over 220 pages long, all meant to demonize Israel.
The report, called "A Threshold Crossed: Israeli Authorities and the Crimes of Apartheid and Persecution," tries to prove that Israel is guilty of apartheid - by both twisting what Israel does and what apartheid means.
I'm only starting to go through it, but its intellectual dishonesty is stark and clear.
Here's only one example, where HRW attacks the very reason for Israel's existence:

The 1950 Law of Return, which guarantees Jews the right to immigrate to Israel and gain citizenship, defines “Jew” to include “a person who was born of a Jewish mother,” embracing a descent-based, as opposed to a purely religious, classification.

Of course, the Law of Return says "For the purposes of this Law, 'Jew' means a person who was born of a Jewish mother or has become converted to Judaism and who is not a member of another religion."
In other words, the Law of Return is echoing the definition of a Jew in Jewish law. HRW, in its zeal to call Israelis racists, refers to the beginning of the definition but not the entire thing.

Most significantly in demonstrating Israel’s demographic goals is the 1950 Law of Return. It guarantees Jewish citizens of other countries the right to settle in Israel, and its 1952 Citizenship Law entitles them to citizenship. 96 The same Citizenship Law, by contrast, denies Palestinian refugees and their descendants, 5.7 million of whom were registered as of February 2021 with the United Nations Relief and Works Agency (UNRWA), 97 the ability to enter and live in areas where they or their families once lived and have maintained links to.

Every nation has the right to determine who is eligible for citizenship, and many countries favor those whose ancestors belong to the same nation. This is not racism.
Throughout the report, HRW asserts that Israel's laws that give preference to Jews - as one would expect in the world's only Jewish state, especially when most of its neighbors are irredeemably antisemitic - are not pro-Jewish laws, but anti-Palestinian laws.  This is absurd, because no non-Jew can receive automatic citizenship. The entire basis of the report is that Israel is discriminating against Palestinians and it simply does not allow that it is moral for Jews to have and maintain their own state where they can be safe from persecution.

This law creates a reality where a Jewish citizen of any other country who has never been to Israel can move there and automatically gain citizenship, while a Palestinian expelled from his home and languishing for more than 70 years in a refugee camp in a nearby country, cannot.

And every single Arab country has laws banning Palestinians from becoming citizens - laws that were on the books since the 1950s, ostentibly to "support" Palestinians. Unlike Israel's laws that give preference to Jews becoming citizens and that do not discriminate against Palestinians specifically, the laws in all Arab League states say that all Arabs can become citizens except Palestinians. For over 70 years, they have been languishing in the countries they were born in and have not had a path to citizenship.
If Israel's laws giving positive preference to Jews (similar to laws in Spain, Italy, Poland and many other nations) is "apartheid" and "racial discrimination," then most certainly every Arab country whose laws specifically discriminate against Palestinians is guilty of the same.
But HRW never says that. Isn't that interesting? The epithet "apartheid" only applies to the Jewish state. Isn't that a super interesting coincidence?
HRW has a problem with the entire concept of a Jewish state, and by extension with the idea of a Jewish people:

Demographic considerations, in particular the quest for a strong Jewish majority, have long underlined Israeli government policy. The key declarative line of Israel’s Proclamation of Independence proclaims the “establishment of a Jewish state in Eretz-Israel.” The proclamation largely narrates the history of the Jewish people and twice in the short document underscores the centrality of Jewish immigration. While the proclamation does commit itself to “complete equality of social and political rights to all its inhabitants,” it presents the newly established state as belonging to the Jewish people, describing Israel
as “their state.”

And here is the best evidence that Human Rights Watch has a problem with Jews. Throughout its mentions of the Law of Return and Israel's Citizenship Law that favors Jews, not once in 220-odd pages does it mention a possible reason why Israel might want or need to have a state of its own. It goes through the history of these laws without once mentioning the word "Holocaust." Not a single mention of "antisemitism." The word "persecution" is only mentioned as an accusation against Israel of persecuting Palestinians. To HRW, the entire purpose of the Jewish state is to discriminate against Palestinian Arabs.
Yes, that is antisemitism. There is not even a pretense of being even-handed, of explaining things from Israel's viewpoint, or even pretending to care that perhaps Jews have a reason for wanting to be free from antisemitic hate - hate that Palestinian Arabs have had throughout their own brief history of nationalism.
As I hope to show more clearly in future posts, HRW twists laws and definitions to put Israel in the worst possible light, ignoring any other interpretation or context. Any counterexample, or any example that shows that Israel is acting like other nations, is ignored or downplayed.
Because Human Rights Watch has a problem with Israel - and a problem with Jews who dare to assert their own national rights on par with every other people.