The reaction of the BDS crowd to the "Jerusalem Declaration on Antisemitism" - which was embraced by actual antisemites and their enablers - was that, while it is much better than the IHRA that they hate so much, it isn't enough.
The BDS Movement is upset that JDA says “Portraying Israel as the ultimate evil or grossly exaggerating its actual influence” might be a “coded way of racializing and stigmatizing Jews.”  According to BDS, in "the absolute majority of cases related to defending Palestinian rights such inference would be entirely misplaced."
Meaning, Israel really is the ultimate evil, and how dare anyone disagree!
“Applying the symbols, images and negative stereotypes of classical antisemitism … to the State of Israel” is perfectly OK according to the BDS Movement, and it is offensive to say otherwise.
“Denying the right of Jews in the State of Israel to exist and flourish, collectively and individually, as Jews, in accordance with the principle of equality” is also not antisemitic according to BDS. Really! They say that Jews have no rights to live in the land because it is all Palestinian Arab land, and therefore any talk about "equality" between Jews and Arabs is really a code word for colonialism. Jews have no rights to live in their ancestral homeland, according to these bastions of liberalism.
Perhaps the best summary of the immorality of the BDsers on justifying antisemitism comes from this quote: 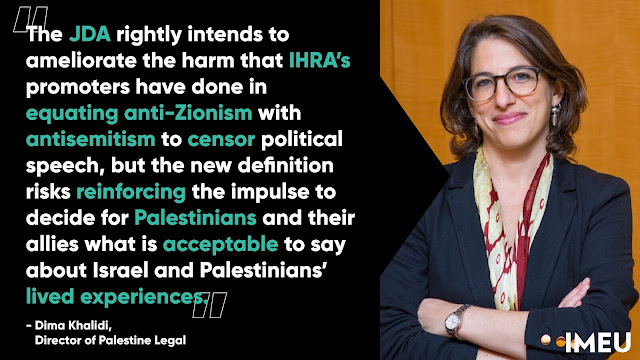 In English, this means that Palestinians should have the right to call Jews Nazis, baby-killers, genocidal maniacs, poisoners of wells, and people who harvest Palestinian organs and blood for satanic rituals - because if that is what Palestinians believe, it is legitimate opinion and cannot be called antisemitic.
In the end, the Israel haters want a "get out of jail" free card to engage in the most vile Jew hatred, because there is a Palestinian exception to antisemitism.
Elder of Ziyon at Wednesday, March 31, 2021
‹
›
Home
View web version