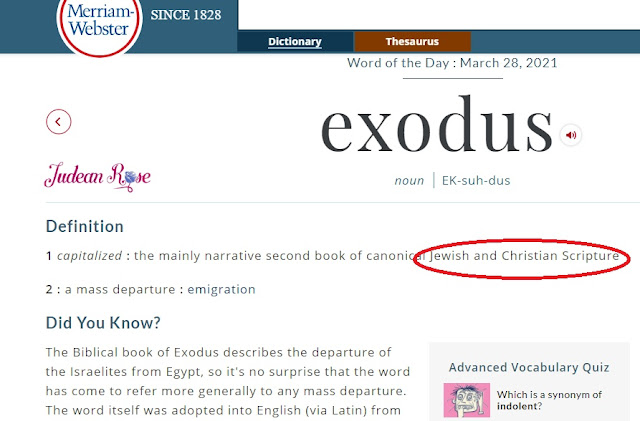 “Exodus” was a fitting selection for Merriam-Webster’s Word of the Day feature for March 28, the first day of the Jewish festival of Passover (Pesach). Pesach, after all, celebrates the miraculous Jewish exodus from Egypt, where the Jews were subject to the worst human rights abuses and constrained from observing their religion for 430 years. Perhaps less fitting than the selection of that particular word on that particular day, were the two word definitions on offer, neither of which, it might be said, referred to the event as such: the Jewish Exodus from Egypt, the anniversary of which is celebrated on Passover. Aside from this omission, the first definition conflates “Jewish and Christian Scripture,” in effect, robbing the event of its distinct Jewish character and identity on the day commemorating the Exodus, Passover.

The first Merriam-Webster definition tells us that capitalized, "Exodus" refers to a book of shared provenance. The Jewish name for this book, however, is not "Exodus" but "Shmot," a Hebrew word meaning "Names," as the book begins with the names of the first group of Jews who went down to Egypt. "Exodus" on the other hand, is a word that has its origins in Greek and Latin, one more apparent attempt at erasing that book's Jewish provenance.

For believing Jews, the Torah was given only to Jews, and the Exodus, referred to by Jews in Hebrew as "Yetziat Mitzrayim" (liberation from Egypt) was a miracle performed for the sole benefit of the Jewish people, with God’s direct, divine intervention: "Va-yotzienu Hashem Elokeinu misham be-yad chazaka u-be-zeroa netuya u-be-mora gadol u-be-otot u-be-moftim" – "God liberated you with a strong hand, and with an outstretched arm, and with impressive revelation, and with signs and miracles."

Despite the fact that the Exodus is a singular event that is specific to the Jewish People, Merriam-Webster suggests (on Pesach Day!) that Jews and Christians share the same book and apparently the same event as equals. This flies in the face of basic Jewish theology, displaying what some might call a callous disregard for Jewish history and belief. The second Merriam-Webster definition for "Exodus" milks the meaning out of the word still further, by leaving the Bible altogether and making generic reference to mass emigration.

In effect, Merriam-Webster tells us what "Exodus" means on Passover Day, without actually telling us what it means. Some might call this "goy-splaining." Merriam-Webster supplies the general public with two definitions for the word "Exodus," with neither referring to the Jewish miracle. One could argue that these two definitions are therefore offensive, as they serve to erase the special Jewish character of the day. This Word of the Day feature, in its seeming innocuousness, is an expression of  cultural and religious appropriation. 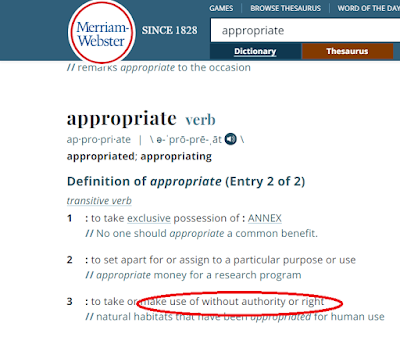 But back to "Exodus." Having read the definitions, we arrive at the “Did You Know?” word trivia section. Here, the idea is introduced for the first time that the Exodus relates to the Jewish liberation from Egypt. It is explained to us, however, that the word has evolved, and now refers to "any mass departure."

The Biblical book of Exodus describes the departure of the Israelites from Egypt, so it's no surprise that the word has come to refer more generally to any mass departure. The word itself was adopted into English (via Latin) from Greek Exodos, which literally means "the road out."

Merriam-Webster then helpfully offers two contemporary examples to show how the word no longer means what it once meant: the Jewish liberation from Egypt:

"Much has been made of the 'Silicon Valley Exodus.' The conventional wisdom holds that the discovery of feasible remote work arrangements during this pandemic has employers—and their employees—fleeing the Bay Area for more affordable destinations." — Sam Liccardo, The San Francisco Chronicle, 6 Feb. 2021

"Throughout the pandemic, there has been an uptick of people vacating the city in exchange for more space in the suburban and rural outskirts of the Greater Toronto Area…. According to a report from Statistics Canada, from July 2019-July 2020, Toronto saw an exodus of 50,375 people moving to other regions and provinces." — Natasha Philpott, Bradford (Ontario) Today, 7 Feb. 2021

To summarize, only in the trivia section appended to this Word of the Day feature does Merriam-Webster at last deign to tell us that the Exodus was an event specific to the Jewish people (though the word "Jewish" is not actually there). We are informed moreover, despite a millennia of the annual Passover seder performed by Jewish people all over the world to celebrate the event, that the word “Exodus” now refers “more generally to any mass departure.” Examples of how the word "Exodus" is applied today, relate to contemporary events, such as the pandemic, and how people have fled to better work opportunities and more affordable conditions. (What they aren't doing: fleeing from cruel taskmasters who work them to death building pyramids out of mud while denying them religious freedom.)

It is of course true that words evolve. But the word "Exodus" still signifies the Jewish liberation from Egypt, even today. This is not a footnote appended to a word definition, but a Jewish reality. We reference yetziat mitzrayim several times a day in our daily prayers. Every Jew is commanded, moreover, to tell the story of yetziat mitzrayim on Passover: וְהִגַּדְתָּ֣ לְבִנְךָ֔ בַּיּ֥וֹם הַה֖וּא לֵאמֹ֑ר בַּעֲב֣וּר זֶ֗ה עָשָׂ֤ה יְהוָה֙ לִ֔י בְּצֵאתִ֖י מִמִּצְרָֽיִם׃ And you shall explain to your son on that day, ‘It is because of what the LORD did for me when I went free from Egypt.’ (Shmot 13:8)

That is, in fact, the entire purpose of the Passover seder. To suggest that yetziat mitzrayim no longer has the same (read Jewish) meaning is cultural appropriation, today a most sensitive subject. From Wikipedia:

When cultural elements are copied from a minority culture by members of a dominant culture, and these elements are used outside of their original cultural context—sometimes even against the expressly stated wishes of members of the originating culture – this is cultural appropriation.

Cultural appropriation is not only a sensitive subject, but a popular one, and the reason Reem Kassis was paid by the Washington Post to write a piece called “Here’s why Palestinians object to the term ‘Israeli food’: It erases us from history.” 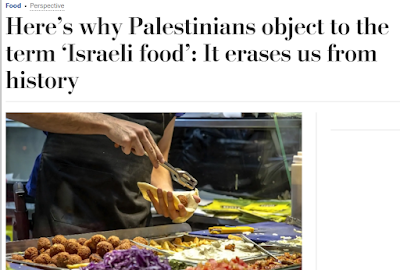 Kassis concludes that Israeli Jews, in an act of cultural appropriation, obscure the true origins of such Middle Eastern standbys as hummus and falafel by calling them “Israeli”:

Dubbing these dishes Israeli in name does not erase the origin of their components or that most of them still come inside or alongside a Palestinian culinary artifact. The irony, though, is that the newly constructed Israeli food culture prides itself on being a byproduct of many influences and immigrant forces while failing to highlight the most important influence — that of the local Palestinian food culture.

It matters little that there was never a sovereign state called "Palestine" and therefore, there can be no such thing as "Palestinian" nationality or heritage. Because Kassis is using sleight of hand. The writer is using the language and words of cultural appropriation to assert a lie with the end goal of appropriation: in this case, the appropriation of Jewish land.

Shivani Persad wrote an op-ed for Cosmopolitan called “You Can’t Say Black Lives Matter if You’re Still Appropriating Black Culture.” Persad, reminiscing over a Twitter thread in the days following the murder of George Floyd says that white people “actively appropriate Black culture” when they post about police brutality “as if they are not also implicated in this system of oppression.”

Persad, in effect, is telling us that there are separate rules for white people, for white behavior, for the words white people are allowed and not allowed to use. And scores of white people believe her, falling in with her suggested mode of behavior and speech. They are no longer allowed to protest brutality, because they are white.

Language, it is clear, is probably the most important tool in the arsenal of cultural appropriation, whether that appropriation is actual or tactical. We have, for example, the issue of individuals appropriating Holocaust language for the purpose of referring to any event deemed onerous or unpleasant. Anti-vaxxers like to say, for example, that in "forcing” people to be vaccinated, this or that government is "just like the Nazis." The Never Trumpers like to say that "Trump is Hitler," referencing his policies on illegal immigration and the wall he built, as if the policies and the construction of a wall were at all comparable to the predicament faced by the Jews of Europe during the Holocaust (P.S. They are not.)

Appropriating the language of the Holocaust is offensive because the Holocaust was a singular event. It was the only time millions of one people were rounded up and shoved into ovens, gassed and burned. And if something is “like” the Holocaust, then the Holocaust must not have been all that special or horrific, after all. Not to mention that the Holocaust had the effect of nearly decimating the Jewish people. The Holocaust was the Final Solution. It was Jewish genocide,

In a similar vein, albeit with a much happier outcome, yetziat mitzrayim, the "Exodus," was a singularly Jewish event. Using the Greek/Latin word, and superimposing a new meaning over even that word, on the holiday that commemorates that day, is a terrible thing--if we will only have the courage to tell the truth. A Jewish person would be within their rights to find it unacceptable to refer to "Exodus" as a shared book--our book is Shmot--or as a general mass emigration from Silicon Valley for economic reasons. This is the language of cultural appropriation. It's taking something Jewish and making it about something else, with the authority of the language people: Merriam-Webster.

But one could also argue that cultural appropriation, as an idea, is only a pop trend. Something that serious people don’t spend even five minutes of their day to consider. And yet, perhaps we Jews should consider this issue of cultural appropriation by others, from a perspective of Jewish strength and pride, to assert and protect our rights as a people with a distinct culture and tradition. This leads to still more intriguing thoughts and questions:

Are Jews allowed to take umbrage when the word “Exodus” is used to refer to both Jewish and Christian Scripture? Or is that just silly?

Is it permitted for us to take offense when people unwittingly refer to “shared Judeo-Christian heritage?” Or should we shut up and adopt the accepted norm: that imitation is the sincerest form of flattery?

May we take exception when the language of the "Exodus," a miraculous Jewish event, is used by Merriam-Webster to refer to mass emigration from Silicon Valley for economic purposes—and on Pesach, of all days? Or should we just wave this away as an insignificant and unintended faux pas?

But the most important question is this: At a time when other minorities are standing against the perceived injustice of cultural appropriation, when do the Jewish people get to do the same? Should everything that is ours be shared and generalized for public consumption? Are our history and our miracles free for the taking?

Or is cultural appropriation something that Jews alone must never be allowed to protest?