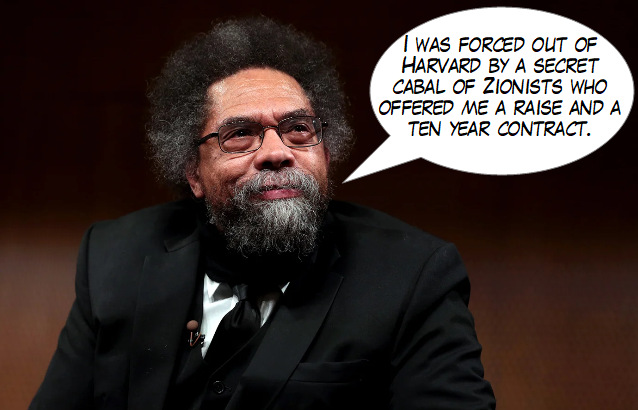 Haaretz interviewed Cornel West, who blamed his not receiving tenure at Harvard on Zionists who didn't like his anti-Israel politics:

Never one to shy from controversy, Dr. Cornel West once again finds himself at the center of a firestorm after Harvard University refused to consider him for tenure – a decision he links to his support for Palestinian rights.
West, 67, previously left the Massachusetts school in 2002 following a public spat with then-President Lawrence Summers, before returning in 2016. He says Harvard’s administration told him there was no possibility for a tenure review but offered him more money or a prestigious chair. He believes there were three possible reasons for Harvard’s decision: his academic work, his age or his politics.
The academic, who will participate in the prestigious Gifford Lectures in 2024, quickly rules out the first two possibilities, citing his previous tenure 36 years ago at Yale and professorships at Harvard and Princeton with the highest possible honors for a faculty member, as well as over 20 books published under his name.
He does not believe his public support for Sen. Bernie Sanders or Black Lives Matter was a deal breaker, noting that his stance on those topics is mainstream enough to not be viewed as alienating. “Then I thought of the Palestinian issue and the Israeli occupation – now that is a taboo,” West says.

West is not telling the truth.
He was not denied tenure - his position was not a tenure track position!
As this article notes, most academic jobs - even senior ones - are not tenure track anymore. West's position wasn't ever eligible for tenure to begin with, and he knew this when he re-joined Harvard in 2016.
During his normal 5-year review, the faculty committee offered him a raise and a 10 year contract, which for a 67-year old man is as good as tenure. But he refused, insisting that they change his position itself into a tenured position - something that this review board couldn't do. As the Boston Globe reported, "The faculty committee was only in charge of reviewing his reappointment and does not have authority to conduct a review for tenure, [Harvard's] spokesman said."
Now, it is obvious why he wasn't granted tenure - he did not have a tenure-eligible job and one cannot make that change at the drop of a hat. West asked for the job to be changed, which is quite a different matter than being denied tenure!
Yet West is insisting in multiple interviews that he was forced out by Zionists at Harvard rather than his own hubris. Yet if the Zionists at Harvard were out to silence him, why did they offer him a raise and a ten year contract?
And is it really that difficult to find professors in Ivy League schools who are anti-Israel?
Now, what does it look like when a professor lies about being denied tenure - and claims that the Jews (sorry, "Zionists") are secretly behind it?
It sounds far more like West planned to leave Harvard anyway, and decided to make a stink accusing "Zionists" of mistreating him.
UPDATE: Mondoweiss has the quote from West where he literally blames Jews for his not getting tenure - because what other possible reason is there?