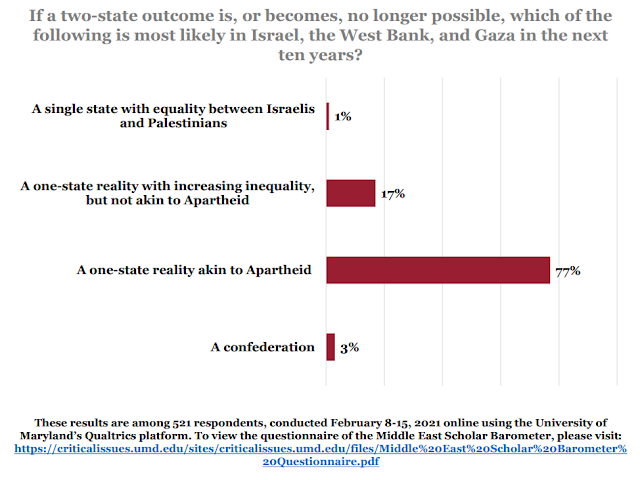 From the Washington Post, an article written by anti-Israel academics Marc Lynch and Shibley Telhami:

The Middle East never lacks for commentary and opinions. Several high-quality surveys regularly ask political scientists and foreign policy experts their views on U.S. policy in the region. But what do scholarly experts on the Middle East think?
Last week, we fielded a unique survey of scholars with expertise in the Middle East, the first of our new Middle East Scholar Barometer. Drawing on the membership of the Middle East Studies Association, the American Political Science Association’s MENA Politics Section and the Project on Middle East Political Science at George Washington University, we identified 1,293 such scholars. The vast majority speak regional languages, have spent significant time in the Middle East, and have dedicated their professional lives to the rigorous study of the region and its politics. Within three days, 521 scholars had consented and responded (a 40 percent response rate), divided almost equally between political scientists and nonpolitical scientists.
Perhaps the starkest finding of the survey is the collective assessment of the Israeli-Palestinian conflict. A strong majority, 59 percent, describes the current reality for Israel and the Palestinians as “a one-state reality akin to apartheid.” An additional 7 percent view it as a “one-state reality with inequality, but not akin to apartheid.” 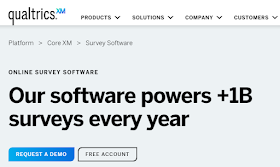 How scientific was the survey? Not at all. It was a self-selecting online survey, meaning that people with strong opinions were more likely to answer. The survey makes itself sound scientific by saying that it uses the "University of Maryland's Qualtrics platform" when Qualtrics is simply an online survey company that anyone can sign up for in five minutes, send a "poll" to their mailing list, and post the results as if they are meaningful.
Qualtrics is as scientific and rigorous as a Twitter poll.
Legitimate surveys are constructed to reduce bias. This poll is constructed to encourage bias. Unlike legitimate surveys, this online poll ensures that people with strong opinions are more likely to respond. And who are more fanatic than Israel haters and BDS supporters?
Which brings us to the second fatal issue with the poll. The vast majority of the respondents are members of the Middle East Studies Association, which pretends to be apolitical but is anything but. While it has not voted on BDS, it has defended it vigorously. And it defends those who want to boycott Israeli universities in the name of academic freedom, which is as Orwellian as it gets.
Before the "call for BDS" in 2005, MESA issued a 2002 statement that would be a condemnation of BDS:

We believe that critical analysis and argument should infuse university life. We believe that individuals should be accorded equal access to that arena for debate without regard to their personal status, country of origin, religious persuasion or policy preference.

Yet BDS advocates boycotting Israeli academics - and MESA defends them, seemingly silently eliminating the "country of origin" clause in their 2002 statement.
A self-selecting, unscientific, online poll of "scholars" who defend boycotting Israeli universities, and only Israeli universities, is being pushed as if it is meaningful. It doesn't reflect reality - it reflects the biases of the people who came up with the idea of the poll and their friends.
This isn't a one-off. This was the first poll of the "Middle East Scholar Barometer" - a way to push political agendas by creating polls whose results are cooked to begin with, while giving credulous news media the pretense that these are objective and accurate surveys.
(h/t Lenny)
Elder of Ziyon at Tuesday, February 23, 2021
‹
›
Home
View web version