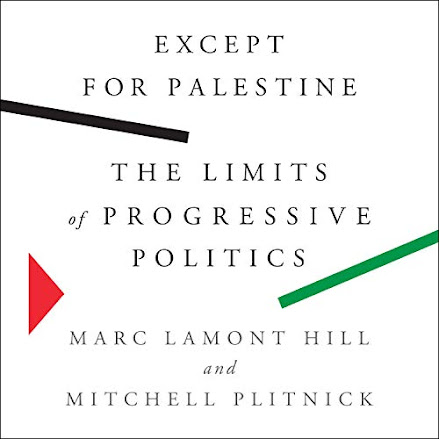 Marc Lamont Hill and Mitchell Plitnick's book "Except for Palestine" was just published. It's thesis is that American progressives are concerned with liberal causes - except for Palestinians.
A small part of the book is available online, and the very first example of the supposed "Palestine exception" given is enough to show that Hill and Plitnick are not honest people.

"I don't care what they say. I don't care what the fake media says. That's an invasion of our country."
These words were uttered by President Donald Trump in advance of the fall 2018 midterm elections. Trump had taken to Twitter and the campaign trail to warn the nation of what he portrayed as a growing immigrant threat stemming from the southern U.S. border. In his remarks, the president not only referred to a caravan of immigrants coming from Central America as an "invasion," but suggested that the majority of the incoming refugees were criminals and terrorists.
Trump's harsh words were coupled with unprecedented action, as he deployed thousands of troops to the border. Although his words and actions sparked considerable outrage from voices across the political spectrum, the response to Trump was nearly universal among those Americans who politically identified as "progressives." As expected, American progressives expressed sympathy for those fleeing persecution, who were desperately pursuing a better life for themselves and their families.' Their response to Trump's draconian immigration views, as well as the policy proposals reflected and foreshadowed by those views, stood in stark contrast to another major announcement that the White House made just weeks earlier.
In the summer of that same year, the Trump administration decided to cut off funding for the United Nations Relief and Works Agency (UNRWA), the agency that provides emergency food, shelter, medication, supplies, and education to millions of Palestinian refugees living in the West Bank, Gaza, and camps in neighboring countries. As a result of this decision, fewer people would have access to proper schooling, health care, and basic life-saving services. This time, rather than outrage, progressives offered little more than silence or apparent indifference.
Of course, these two situations are not exactly the same. After all, the idea of Honduran and Guatemalan refugees heading slowly up to the U.S. border to seek asylum would be expected to cause anxieties, however racist, among nativist Americans. With regard to UNRWA, however, the goal was simply to meet the basic needs of a vulnerable population. And with a cost of around $200 million for that fiscal year, support for UNRWA was a drop in the ocean of the U.S. budget. American taxpayers would incur no other costs to substantially relieve the threat of starvation, lack of shelter, absence of education, and shortages of medicine to millions of refugees. For most people, but especially those who identify with liberal or progressive values, this should have been an easy call. Sadly, it was not.

That is the argument.
What Hill and Plitnick omit is that UNRWA has no right to exist. Its beneficiaries are not refugees according to any definition. The Palestinians it supports should be taken care of by their host countries. No other UN agency offers permanent medical aid, permanent housing and full education to millions of people.
Any Palestinian Arab who was displaced and ended up in Israel's boundaries after 1948 became citizens of Israel.
If there is a Palestine exception, it is symbolized by UNRWA in ways that are quite the opposite of what Hill and Plitnick intend to say. Only Palestinians are expected not to become citizens of their host countries. Only Palestinians are considered "refugees" for all generations, forever. Only Palestinians are expected to get free housing and education paid for by the world. Only Palestinians who are citizens of another state (Jordan) or who live in their own land are called "refugees."
And only Palestinians are taught by a UN agency to hate Jews in their classrooms.
Of course Hill and Plitnick don't want their readers to know about UNRWA's scandals and corruption. Of course they don't want to mention the hate taught to Palestinians daily. No, they just want to tell their audience that Palestinians are the only people who are not responsible for their own welfare and their own people, despite billions of dollars in aid over the decades. The only people who deserve unlimited funds that can be diverted to terror.
Only Palestinians have books written about them of this type. That is the real Palestine exception.
Elder of Ziyon at Thursday, February 18, 2021
‹
›
Home
View web version