PA tells Washington that Hamas is committed to peace and a two state solution. Hamas disagrees (in Arabic only.)

The Palestinian Authority has reportedly sent a letter to Washington stating that all Palestinian factions — including Hamas — have committed to a Palestinian state within the pre-1967 borders with its capital in East Jerusalem, and to peaceful popular resistance against Israel.
The letter was allegedly sent as part of a reconciliation process between the vying groups ahead of scheduled Palestinian elections. Hamas, an Islamist terror group which seized control of Gaza in 2007 and avowedly seeks Israel’s destruction, has never publicly withdrawn its commitment to violent resistance against Israel.
Palestinian officials who spoke to The Times of Israel have previously emphasized that Hamas’s participation in the Palestinian political process would depend on its acceptance of previous agreements signed between Israel and the Palestinians, in addition to committing to “peaceful popular resistance.”

And what does Hamas say? 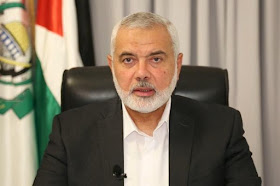 Hamas leader Ismail Haniyeh gave a speech on Saturday at a "United Against Normalization" conference. Haniyeh said Hamas was committed to resistance "in all its forms," a phrase that explicitly includes terrorism, although he did say that these forms also include peaceful and political resistance.

As far as accepting a two-state solution, Haniyeh also rejected that as well, saying that Hamas wants Palestinian leaders to ignore everything that has happened since before the 1991 Madrid Conference and all agreements made with Israel, and to reject the legitimacy of "the occupier" Israel.

Crucially, the official Hamas English report on the speech  changed what he said to bring it more in line with US demands. It did not include the phrase "resistance in all its forms." And instead of saying "non-recognition of the legitimacy of the occupier" it changed his words to "not give any legitimacy to the occupation," implying that Hamas is OK with Israel but just not with its control of the lands won in 1967.

Hamas has become adept at Yassir Arafat's art form of saying one thing in English and the opposite to Arab audiences. The PA is happy to go along with the charade that Hamas has somehow reformed, and is quite happy to lie to the Biden administration about Hamas' words and aims.

So far, it seems that the Biden administration is willing to be fooled as well, and is more than willing to return to a US policy based on fantasy rather than reality, pretending that what Hamas tell the West is the truth and what it says in Arabic is just rhetoric.